In India, specifically among Hindus, cows are considered holy. This exalted status does have some peculiar societal effects. For one, when cows roam freely on roads, people do not get them to move out of the way, instead they wait for the cows to disperse of their own accord. Sometimes while driving by a cow, a particularly devout individual may even join his hands in a sign of prayer and bow towards his bovine idol. What is further indicative of the cult of the cow that exists in India is politicians faith in its supernatural abilities. For example, a member of parliament from the current ruling party explicitly stated that the cow is so holy that its dung and urine can cure cancer. (https://www.thehindu.com/news/national/cow-urine-can-cure-cancer-bjp-member-in-rs/article7012010.ece) Similarly, logic escaped the education minister of Rajasthan when he said that cows not only inhale oxygen, but exhale oxygen too. (https://timesofindia.indiatimes.com/city/jaipur/cows-inhale-exhale-oxygen-says-rajasthan-education-minister-vasudev-devnani/articleshow/56612529.cms) . It will never cease to amaze me that an ‘education’ minister truly believes that a the cow, an immense producer of methane, is a viable solution for pollution and climate change.

However, this exaltation of the cow has a dark side to it too. The current ruling party, the Bhartiya Janta Party (BJP), has adopted ‘cow-protection’ as a major policy move since they came to power in 2014. To give some context, the BJP is a right-wing, Hindu-nationalist party that repeatedly implements policies that serve to marginalize India’s Muslim minority as well as individual lower castes. An example of such a policy is a massive ‘beef-ban’ that recently took place. Due to this, the slaughter and consumption of beef has been prohibited in a majority of states. Since, a large proportion of the country does not consume beef the cost of it is much less than that of chicken or mutton. This makes beef a significant part of the diets of many  marginalized minorities in India such as Muslims, Christians and Dalits. Now these groups no longer have access to cheap protein, indicating that this ban disproportionately affects minorities. Additionally, the government’s cow protection agenda has given rise to a societal menace known as ‘cow vigilantes’. These ‘cow vigilantes’ are mobs of individuals who go about attacking and lynching people under the guise of ‘cow-protection’. They have killed people on the suspicions of eating beef, cow smuggling and even storing beef in the freezer.( https://www.economist.com/the-economist-explains/2018/02/15/cow-vigilantism-in-indi)  The ‘cow-vigilantes’ are usually Hindus and those targeted are predominantly Muslim. Thus, it is more than evident the ruling party is using the docile cow to polarize the Indian population on communal lines. The implementation of policies that have disproportionate negative effects towards impoverished minorities, the mass lynching of people and this  crackdown on secularism needs to be halted with the utmost urgency. It is incredibly refreshing to see Karnataka standing its ground as beef is available in some parts of Bangalore, which is not something you see anymore in cities in the North like Delhi and Agra. 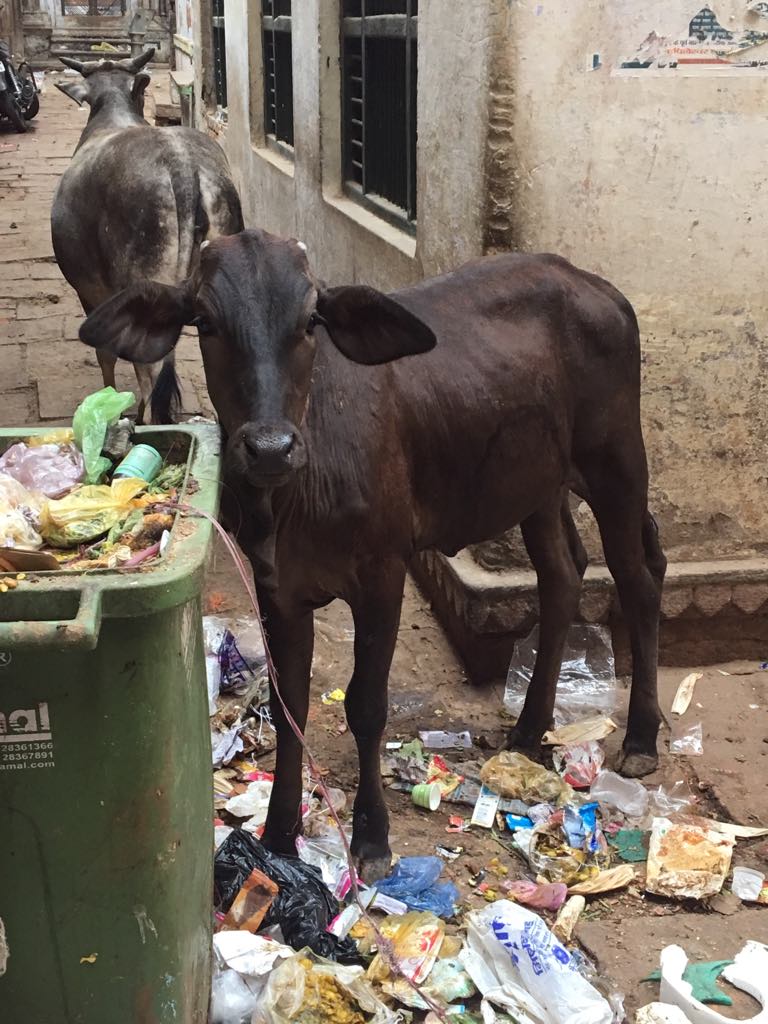 Despite the government’s ‘cow-protection’ agenda, cows continue to be mistreated and  are inadequately fed often resulting in them eating garbage.

Penn Class of 2019 - majoring in History. Intern at Shahi Exports, Bangalore, in Summer 2018

The Beauty of Biryani