“Pongase las pilas.” If directly translated from Spanish to English, this phrase means “put on your batteries.” When placed into context (and appropriately translated by a Colombian), it becomes an idiomatic phrase which means “get your act together.” Growing up, I was often commanded by my parents to “put on my batteries” as they consistently reprimanded me for being “dormida” (relaxed or slow-moving) or demanded that I become more “avispada” (sharp or keen). At a young age I was trained to move quick, remain ambitious and always be clever. As an American-born Colombian, the training was essential to my growth and progress.

But, why am I talking about Colombian cultural terms and beliefs on a blog meant for discussions about student intern experiences in India?

Allow me to explain. I offer these pieces of my culture to preface my retelling of some of the experiences I’ve had during my time in Madurai, Tamil Nadu. I specifically discuss those which have lead me to develop a better understanding of my identity as a first-generation, Colombian-American. You see, when beginning my internship, I didn’t realize how much I would feel disconnected from my Latinidad in a foreign environment and how much that would affect me. Being consistently reminded as a child to be “avispada” meant learning to always defend my culture and proudly uphold my traditional beliefs, especially when I was the minority. Thus, I grew accustomed to sprinkling my English with Spanish words in public and being unapologetically straightforward about my upbringing as the daughter of immigrants. As you can imagine, I was frustrated when I found myself editing my phrases, changing my vocabulary and limiting how often my accent came out during my time in India. I realized I was filtering myself for the benefit of those around me, something I had taught myself to never do.

Throughout my 10-week internship, there were several instances in which I felt homesick, many of those stemmed from feeling like I was out of touch with my culture and my mannerisms. I spent a large chunk of my free time (when I wasn’t traveling or working in the office) trying to understand what it was that lead me to feel so disconnected from that (besides the obvious physical separation). I had to ponder about the interactions I had in general, but more specifically with my co-interns. We are a very diverse group, all from very different socioeconomic, cultural, academic and religious backgrounds. As you can imagine, this allowed us to learn so much from each other about different perspectives, opinions and biases regarding some very controversial topics. Before you read on, I have to emphasize how grateful I am to have spent my summer with these three individuals. They were some of the most supportive, loving, kind and intelligent individuals I have ever known and they made this experience even more incredible than it already was. However, to continue my previous thought, there was something about our diversity that influenced my identity crisis (to be dramatic). There were some instances in which, mid-conversation, I felt there was a barrier that kept me from expressing my unfiltered thoughts. I was different than them. I hadn’t traveled to various countries for vacation, I hadn’t seen a world wonder (until this trip), my parents weren’t doctors or business people, and I didn’t know about many common pop or history facts. My whole life, my Colombian identity has dominated over my American identity so I was detached from the mainstream culture and oblivious to many common references. My lifestyle was shaped by the histories and experiences of my immigrant family which meant that I lead a life very different from your average American girl. I was used to being around people who easily understood that fact, and here I was surrounded by people who could never, and not by their own fault, begin to comprehend that kind of reality.

One a weekend trip in Munnar, Kerala with my co-interns!

Visiting the Taj Mahal on our last weekend trip 🙂

Now, it was not just my interactions with my co-interns that were leading me to feel so….”un-Latina”, for lack of a better term. I realized this later when I had an interesting conversation with one of our neighbors at Inspiration, the trainees hostel we were staying at in Madurai. After lunch one day, one young lady asked me, “are you Indian?” As I had anticipated, I was asked this question multiple times while in India. My physical appearance has always prompted people to try and guess my ethnicity. I wasn’t easily identifiable as a Latina, instead, many asked if I was Indian or in some cases Egyptian. I never saw the question as inconvenient or provoking, but in this instance, when I asserted that I was not Indian, the woman persisted with “then what are you?” For the first time, I found myself struggling to find the words to clearly communicate what I was. I decided to respond with “I’m Latin American, I was born in America but my parents are Colombian”. I didn’t feel satisfied with my answer, something about classifying my American identity made me uncomfortable and she exacerbated that feeling when she concluded the conversation by saying “then you’re American” and walked away.

With just one sentence, this woman had erased an entire part of my identity for the purposes of clarification. Then it all made sense. During my entire trip, I was only ever given two options to identify myself; I was either possibly Indian or American, there was no in between. The part of me that was prideful of being Colombian seemed to have no place here and I was not used to that feeling.

In America, I represent Colombian culture. My skin color, my limited vocabulary, my Spanish accent, and my mannerisms make it obvious that I’m not white or privileged and so I fall in the Colombian, minority category. In India, I represented American culture. My quick English, my embarrassing accent when trying to speak Tamil, my wardrobe, my inability to handle spice among many other things, made it clear that I come from the U.S. and so I am categorized as just American. That seems uncomplicated, but the issue is that for me it was a strange, out-of-body experience. In the U.S., I’m not “American enough”, I’m obviously a minority, but here I am in India, playing the role of the “American girl doctor volunteer”.

Some of the amazing nurses I worked with in the retina clinic!

Being American in public and at work was fine, I could get used to that. Being American with my co-interns was different, it made me feel like a fraud. That identity comes with intrinsic pieces of knowledge and worldly experiences that I don’t have because I was raised as a Colombian, so I had to shift when I went from being in public to being in private with my co-interns, but that wasn’t easy to do. I myself got caught up in the role of the “American girl” in public that when we were in private, I forgot to remind myself that there were some conversations I couldn’t contribute to, some experiences I couldn’t relate to, some things I just wouldn’t get.

After realizing why it was that I felt disconnected from my Latinidad, I “put on my batteries” (as my parents would say) and I readjusted the way I was expressing myself. I stopped being afraid to admit when I had no knowledge of certain topics we discussed as a group. I stopped filtering my vocabulary and allowing Spanish words to slip into my sentences. In some instances, I even taught my co-interns some common idiomatic phrases like “no dar papaya”. When we practiced salsa at dance class (we went to a dance class three times a week after work!) I identified the songs that were classics and pointed out the ones that were not salsa at all. They were all so welcoming of my unbounded excitement every time we started a new salsa class. 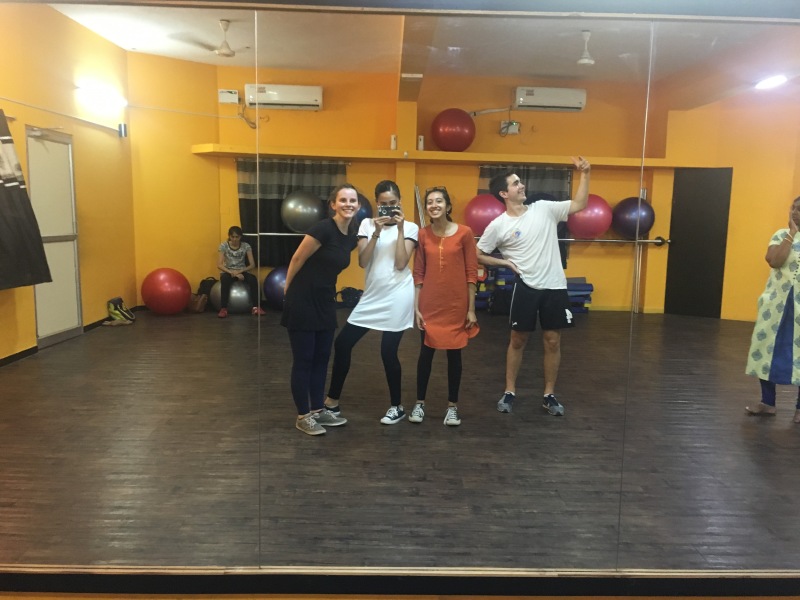 Us at dance class!

As our 10-weeks in Tamil Nadu come to a close, I have been reflecting on the experiences I had. Having a better understanding of myself and my identity as a Colombian-American is one of the many lessons I take home with me. Being away from home this summer and away from the hectic lifestyle I follow as a Penn student, allowed me the space and time to focus on things other than school. It is a unique learning experience and I could never fully fit into words the kind of impact is has on my outlook on life. I am endlessly grateful to have this opportunity and to my co-interns for the support they always offered me. I can’t imagine a better group of students to explore India and social issues with!

If you’re curious about the work I did in the office or the traveling adventures we had, stayed tuned for my next blog posts!

I am a rising senior at the University of Pennsylvania, majoring in Biological Basis of Behavior and minoring in Chemistry. This summer, I will be interning at Aravind Eye Care Systems in Madurai.