“We’ve gathered here to spread vision to the community each month on the last Saturday,” explained the wise old man sitting across from me, pausing for a brief moment to muse the passage of time before adding, “for past 22 years.” It wasn’t easy to hear the sage against the hum of the examination, instruction and patient shuffling going on behind me, but his warm eyes and bright cotton shirt and dhoti commanded attention. The man had been a friend of the late founder of Aravind and had been hosting comprehensive eye screening camps in his humble marriage hall since well before I was born. These ‘camps’ serve as are pop-up vision clinics to provide eye care to underserved and predominately rural communities that suffer from the highest incidence of vision complications. I had the opportunity to visit one of these camps just over a week ago and came away learning about more than just ophthalmology.

Following the introduction from the community organizer I walked through the nine stations that make up the clinic’s highly efficient workflow. After registering, going through refraction, and completing a doctor’s checkup, patients that are recommended surgery get their vitals checked (blood sugar levels are a particular concern) and visit the counseling station to learn about their procedure and consent to the operation. As I listened to the presiding manager describe the process unfolding directly in-front of us, I hastily assumed consent would be given through a written signature. As I took a closer look at the table however, I noticed that there were few pens, and an unusual number of ink pads. To my surprise, counselors were guiding most patients blot their thumbs in ink and stamp them on the signature line. They had never signed their names before.

The poignance of this anecdote reflects the two aspects of my internship that have made my time here in India truly remarkable. The first has been the opportunity to observe India through the lens of healthcare. The profound glimpses into the unfamiliar lives lived by those in margins of the developing world have been occasional in my wandering travels but are frequent while working with Aravind. This derives from the peculiar interactions fostered in hospital setting, with patients shuffling about, carrying a swirling mix of fear, awe, boredom and anxiety as they await their routine checkups, life altering treatments and devastating prognoses. Within this milieu materializes a mystical window into the human experience, one that transcends barriers of language and culture. This window has been an important tool in my exploration of privilege and inequality during my time here.

There are countless aspects of western life that we take for granted each and every day, but few are as pervasive as our access to healthcare, and consequently our health. Although we are often reminded to be thankful for what we have—for the life that we were so fortunately assigned, it is far more difficult than it sounds. Not only is it difficult to fundamentally grasp the magnitude of inequality in our world, but the mental state of being thankful itself seems to conflict directly with our evolutionary drives, making it harder at the subconscious level to appreciate what we have. It is for this reason that I have tried to immerse myself in as many unfamiliar settings as possible during my time here, for each new environment exposes the faults in my perspective and brings a new insight to surface, such as my presumptions of literacy.

The second aspect that has made my time here special is my exposure to the incredible vision and impact of the Aravind Eye Hospital System, the organizer of the camp I attended and also where I have been conducting my internship this summer. Working for the Madurai branch of the Aravind system these past weeks with the many kind and passionate individuals of the Community Ophthalmology division (LAICO) has inspired me with new hope for healthcare and humanity. LAICO focuses both on managing the hospital and disseminating the Aravind model to organizations around the world looking to eradicate needless blindness in their communities. The Aravind system is the largest healthcare system of its kind in the world, but that stat does not come close to encapsulating the effects it has had on blindness in South India and around the world. 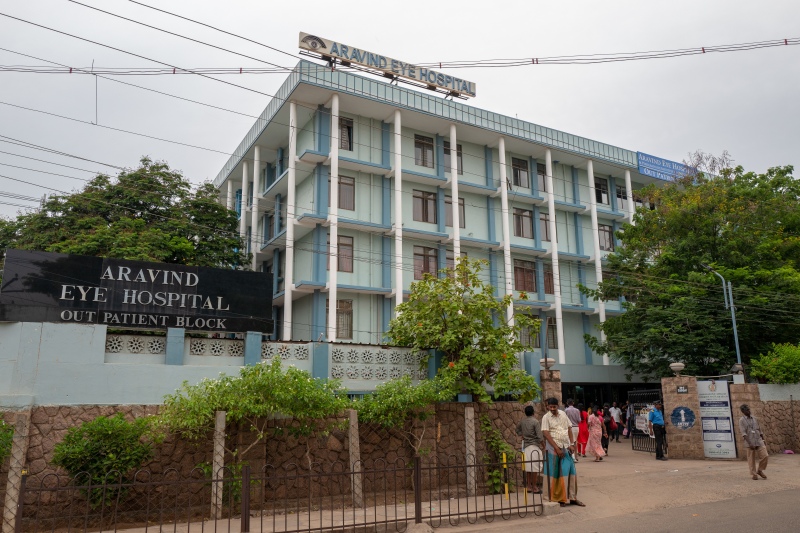 I’m about to go into a somewhat longwinded description of what makes Aravind so remarkable (mostly because I enjoyed writing it, but also because I don’t trust you all to read up on it on your own). If you’re not in the mood, feel free to skip the next 6 paragraphs.

First and foremost, it’s important to establish the dire context for this enterprise. As of 2012, It was estimated that there were 39 million people living with blindness worldwide, 15 million of which residing in India alone. Of that Indian population, about 60% are blind as the result of cataracts, a progressive clouding of the lens that is entirely treatable with an artificial lens replacement substituted during quick surgical procedure. Blindness due to cataracts has been all but eradicated in the developed world, but the stark lack of resources has led to the proliferation of unnecessary blindness throughout India. This disease is most prevalent in the poor, rural population on India where individuals lack means and the access to healthcare, and for which the prospects for the blind are devastatingly bleak.

Much of the history of the Aravind eye care system revolves around its founder, Dr. Venkataswamy, a village man who defied his debilitating arthritis to become an ophthalmologist, and who founded Aravind as a way to give back to his community after retiring from his post at a government hospital. At the time of hospital’s inception as a 11-bed hospital in Madurai staffed by three of Dr. V’s family members in 1976, the state of ophthalmological healthcare in India was even more dire, but Dr. V got right to work. Over the course of the next few decades, Aravind grew in both number and size of its hospitals thanks to its guiding mission of “eliminating needless blindness” and several keen innovations. Aravind now operates 12 secondary and tertiary care hospitals, along with nearly 70 primary care vision centers that utilize telemedicine to provide accessible care in underserved communities. Overall, the AEH system saw over 3 million out patients in 2017 (over a third of which were treated for free, or at a highly subsidized rate), and completed nearly 300,00 cataract surgeries. The main drivers for Aravind’s ability to meet the massive need for quality, affordable healthcare is its innovations in staffing, surgery, outreach and manufacturing.

The backbone of the Aravind model is its all-female clinical nursing staff, which are designated as Mid-Level Ophthalmologic Personnel (MLOPs). The MLOPs, or sisters, as they are commonly referred to, are girls that are recruited directly from local secondary schools and undergo a two-year training program to become highly specialized in a particular clinical role. The MLOPs take care of just about all of the hospital operations outside of diagnosing patients and doing surgeries. They direct, test, refract, counsel and record data for the hospitals 6-days a week, at a meagerly, although relatively fair wage. With the MLOPs handling the routine tasks, the hospital is able to maximize the productivity of its most expensive resource, its doctors.

The second major innovation (not in chronological order) was the hospital’s decision to install two operating chairs in each operating theater, allowing surgeons to seamlessly switch to the next surgery while MLOPs help the bandage the finished patient up, guide them back to the ward, and grab another patient from the waiting room to prep them for the next surgery. This innovation is the key factor in Aravind’s productivity because each PHACO surgery, the most common and highest quality cataract surgery technique takes only 15 minutes on average, meaning each minute spent in preparation is a minute wasted (even more efficient, small incision cataract surgeries take only 3 minutes on average). Conventional wisdom at the time Aravind implemented this method was that having two operating beds would lead to increased incidence of infection. Amazingly, after just a few years of implementing the method a retrospective study determined Aravind’s surgical method resulted in a lower infection rate and fewer complications than the National Health Service of the UK. Patients waiting for examinations from one of the two doctors present

The third factor in Aravind’s progress towards its mission has been its ability to provide care to patients in rural villages, which I witnessed first-hand at the camp. Reaching the rural population has always been a paramount to the primary goal of Aravind, but for many years these camps were less than effective. The problem they were experiencing was not a lack of participation, but low rates of acceptance (~15%) of the surgical advice given in the camps. Frustrated with their impact, Aravind took a closer look at the reason behind this inadequacy. The survey they led found that despite offering the cataract surgeries for free, patients were inhibited by food transportation costs, fear of surgery, and reluctance to leave their families. In response to the survey, Aravind swiftly redesigned its system. It negotiated with community and government sponsors to provide food and transportation, organized bus trips so that patients traveled with others from the same or nearby villages, and organized support groups for patients during their recovery phase. With the new practices in place the acceptance rate soared, compounding every year as word spread within the villages. Aravind now sees over 350,000 camp patients a year and has a surgery acceptance rate of over 90%

It’s almost unheard of for a hospital system to get involved with manufacturing consumables, but when inter ocular lens (used to replace the cloudy cataract) surgeries became the standard of care they cost upwards of 100$ per eye, far too expensive for Aravind to offer. Determined to provide the highest quality of care Aravind enlisted the help of American engineers including David Green to implement their own in-house manufacturing facility and begin producing the lenses for a tenth of the original cost. The manufacturing arm, named aurolab, has since expanded its operations, and now provides discounted lenses, sutures, surgical blades and pharmaceuticals to the Aravind system along with eye hospitals in developing nations around the world.

For further reading on Aravind: 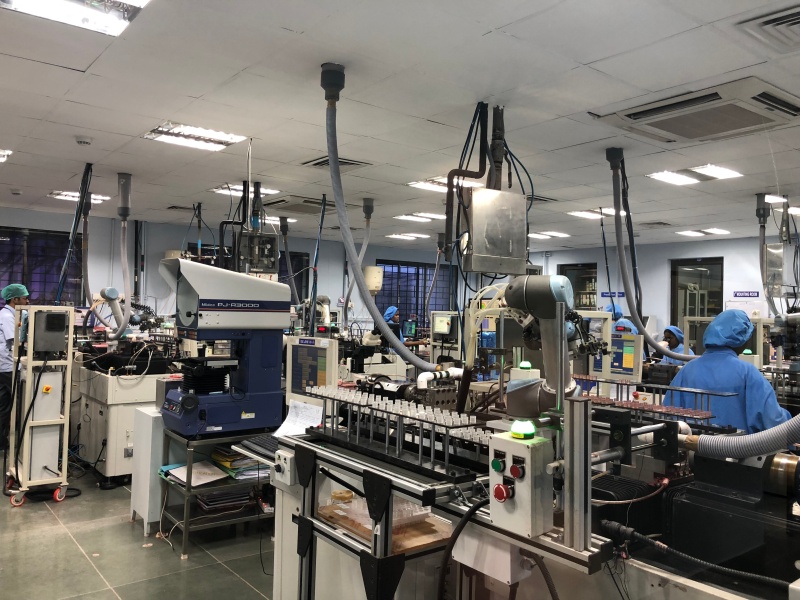 Its startling how quickly 6 weeks can pass. I apologize for keeping these experiences to myself for so long, but things have been quite busy. Between the 9-5 / 6 days a week at the office, after-work activities and Sunday travels there has been disappointingly little free time to blog.  I’m also guilty of not taking full advantage of the free time I do have for I am still unaccustomed to shaping my thoughts into a coherent blog post with proper voice and explanation, and readily prefer dissecting my new experiences with my friends and fellow group mates through conversation, or personal exploration in my moleskine. This, compounded with my ineptitude at writing while watching the world cup, which has also consumed a fair portion of my free time over the last month, has led me to this current state.

Class of 2021 ~ Pursuing degrees in Biophysics and Economics. Intern at Aravind Eye Care Systems in Madurai Tamil Nadu for summer 2018.