I was one of the first to step out of the bus that had “Aravind Eye Hospital” written across the windshield. I stood to the side and watched what the others did, hoping to catch on to what I was supposed to do next. “Ma’am? Come, come,” a young nurse said as she motioned for me to come in her direction. She probably noticed the look of confusion and frustration I wore on my face. She tugged lightly on my arm, showing me the way and helping me navigate the unruly traffic while crossing the street. She let go once we were safely on a side walk again and smiled softly at me. I looked up, realizing we had arrived at the site where today’s eye camp would take place.

Eye camps are one of the many efforts Aravind Eye Hospital has put in place to enhance their community outreach. Through these camps, the providers bring eye care to the doorstep of people that need it the most but are incapable of finding a means by which to travel to the main hospitals. Typically, an eye camp consists of a group of doctors, nurses and counselors being transported to a rural area where they can screen, counsel and refer patients to other health professionals. They identify any specific conditions and prescribe a treatment or referral. I was the first of my intern group chosen to attend one of these eye camps and I must admit that I was left in awe.

Before all of the patients began to arrive, the two female doctors assigned to this specific eye camp in the town of Peraiyur welcomed me warmly. They inquired about my origins, purpose and goals while also sharing with me tips about what to watch out for throughout the day. Then, in only minutes, the conversation ceased and the two young ladies were immersed in a crowd of curious patients. They sat between two plastic chairs, one on their right and one on their left. Two lines formed behind the doctors and one by one patients sat in the chairs eagerly awaiting their turn to be evaluated. With only two flashlights (which they call “torches”) and a few bottles of eye drops, the doctors shifted from right to left, left to right, over and over throughout the day sifting through the patients.

I picked up on some of the English words I could hear as the doctors communicated in the local language. They redirected patients to different services in the camp, shouted commands for the nurses (which they call sisters) and excitedly requested help from others. Amidst the tumult, they still found the time to offer me coffee even though I was only sitting there watching them. Three coffees were brought to us by the eagerly playful teenage boys that were volunteering that day; one for me and one for each of the doctors. My coffee was finished within minutes, but their cups sat there untouched as they continued to shift from right to left, left to right. 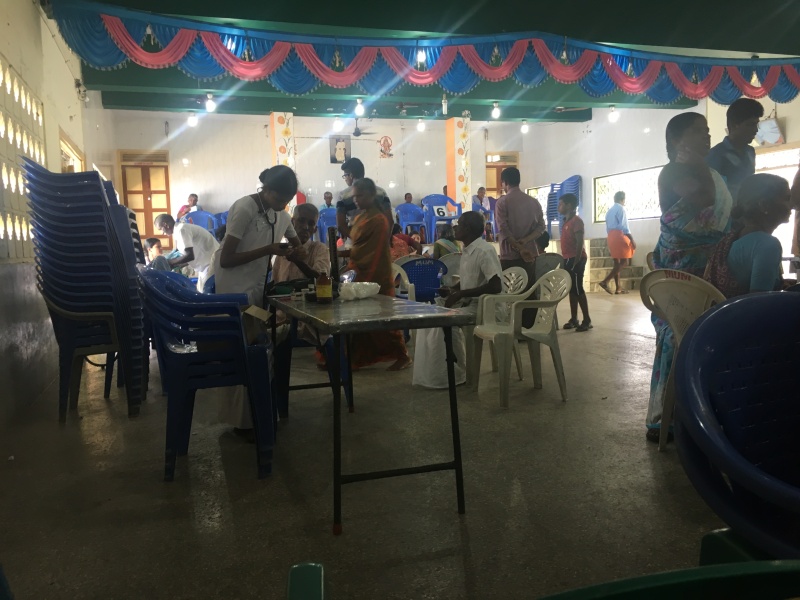 A few times I stepped away from the doctor’s station to observe what the nurses were doing in the different areas of the camp. At station 3 I watched a sister measure intraocular eye pressure and inject liquid into tear ducts, her movements seemingly intuitive and automatic. She smiled as she saw me approach and broke her routine to kindly explain to me what she was doing. There was an organized cycle of steps she followed: apply anesthetic eye drops, take eye pressure, refill needle, gently inject fluid in tear duct, wipe eye, call next patient, repeat. It was incredible to me how she dexterously used the manual old-fashioned device to measure eye pressure and how precise her movements were as she pressed the needle into the patient’s eyes, but she found my enthusiasm silly.

Approximately 200 patients were seen that day and about 50 were referred to surgery at Aravind in Madurai. To ensure these selected patients actually completed their treatments, the staff loaded the patients onto a bus and transported them back to the hospital in Madurai where they would stay in a hostel awaiting to be brought in for surgery. It was clear that all possible barriers keeping patients from seeking and receiving service were considered and appropriate solutions were offered. It was an impeccable demonstration of how dedicated Aravind is to providing care and achieving its founder’s mission of “eliminating needless blindness”.

Besides having the opportunity to learn about various eye diseases by observing some of the patients, I also befriended a few of the sisters. We communicated through hand gestures and a few English words, but they enjoyed looking through the pictures on my phone the most. As I shared images of my loved ones, they made kind remarks, approving of the pretty faces and sights. They made me feel so welcomed that I almost forgot I was a foreigner in an unfamiliar land.

The next day was when I came down with an awful stomach ache. I had no option but to eat some of the street food when I was at the camp, but it was worth it. As I curled up into a ball, fighting the stomach cramps that tried to put a damper on my parade, I reflected on my experiences. Like I said, I was in awe at how the providers were capable of offering so much to the patients with such little resources. The time and exhaustion were not relevant to them as they sorted through all of the different patients and listened to all of their cases. No words are sufficient to describe what I experienced, but I hope that some of my pictures can relay at least part of it.

I am a rising senior at the University of Pennsylvania, majoring in Biological Basis of Behavior and minoring in Chemistry. This summer, I will be interning at Aravind Eye Care Systems in Madurai.

Musings from the middle