India is thousands of years older than the United States, yet the western world has an enormously pervasive influence on this country.

During our trip, Nancy and I visited Amritsar, deciding to visit the Wagah Border, where at sundown each day, Indian and Pakistani Border Security Forces demonstrates feats of military strength. The energy there is palpable, as crowds try to prove that not only is their military superior, but their love for the country is as well.

And at this nationalistic event, anyone with a foreign passport is entitled to a VIP seat. Perhaps ­so people from other countries can see India’s strength with a great view— but it seemed to me as another example of preferential treatment given to foreigners. 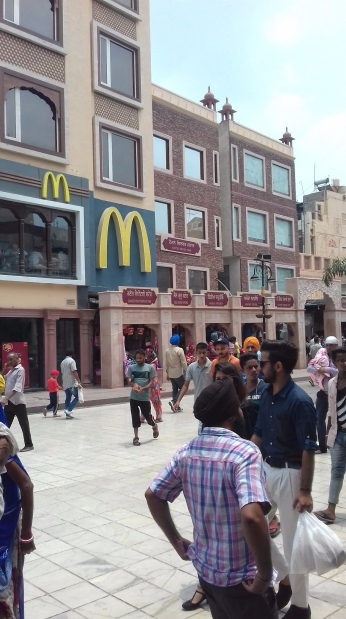 When we visited the Golden Temple in Amritsar the next day, local sweet shops selling aam papad (mango taffy) and jutti (a traditional Punjabi shoe) are interspersed with Subways and McDonald’s. America chains here are far from uncommon: when I asked for Mexican food recommendations, I was advised to visit Taco Bell and Chili’s; Pizza Hut ads fill my Facebook feed. While menu items have an Indian spin—Chicken Tikka Pizzas and McAloo Tikki Sandwiches­—modern culture have a definitive Western influence.

English is a status symbol here: speaking better English, having less of an accent is an indicator of wealth and the ability to receive an American education. Despite sweltering heat in Delhi where loose, cotton Indian clothes are much more appropriate for the weather, an overwhelmingly large number of people wear jeans. Whiter skin is a beauty ideal- Americans go to beaches to tan, and Indians try whitening creams and facials in an attempt to meet these beauty standards.

These ideals extend further into academia. The resources I have been developing throughout the summer have their basis in the Health Belief Model (HBM), a well-documented behavioral change model for diabetes lifestyle changes. The model draws on 6 constructs (perceived susceptibility, perceived benefits, perceived barriers, perceived severity, cues to action, and self-efficacy) to help understand why individuals

are not performing a certain behavior (i.e. exercising, eating healthily) and develop educational resources to target these specific reasons.

At the Second National Civil Society Consultation on Non-Communicable Diseases in India, Dr. Arora (Director of the Health Promotion Division) explains this ongoing project.  Afterward, she informed me we need to revise our project- an American organization at apparently discontinued the use of the model and we should follow accordingly.

Although our team was unable to find news of this organization or what they had replaced the HBM with, it was so interesting to me that there was a such a readiness to discard a model specifically chosen for its success in diabetics, youth, and in Low and Middle-Income Countries. It spoke to this overwhelming perception that “American” must equal “correct”.

There is a danger to ignoring the Indian context. The HBM is largely based on culture and on people’s perceptions which are entirely subjective to the region. The success of interventions depends on the relevance to Indian perceptions rather than Western ones.

Many in our country strive for America to be great, but in India — even as people joke about Trump — there is still an encompassing respect for our “greatness”. But as our time in India came to a close, I wish there was a way to convey to many of these people, that India is pretty great too.

Class of 2020, majoring in BBB ||| Public Health Foundation of India in Gurgaon, Haryana