It all started at 6:30 AM on a Sunday. A group of sisters, a doctor, and I were ready to board one of the Aravind buses headed to Rajapalayam, a two-hour ride away. As much I would have liked the trip to be a little vacation, it was instead a work trip to Aravind’s eye camp. By the way, sisters are young Indian girls that Aravind trains to assist eye doctors in all the small steps that a patient goes through to be treated. None of them is my sister, just so you don’t get confused.

The ride was another opportunity for me to explore the splendid landscape that India offers. Meanwhile, I was able to chat with the doctor, who looked so calm despite the fact that she was about to change people’s lives in a few minutes. She and another doctor expected to treat 200 patients at the camp, and she estimated 50 of them to be transported back to the hospital for surgery. Finally, we arrived in a school that was about to be transformed in a hospital for a few hours. My role for the day was to be an observer. I guess I was supposed to observe everything, which I did.

The sisters set the place up and the work began. You wouldn’t believe how an eye camp works. Patients’ lines were moving with an incredible coordination, while the 2 present doctors were scrutinizing the patients’ eyes, using a torchlight. The other crew members were taking care of all sorts of auxiliary examinations and tasks. Two blue clad sisters were at work making glasses on the spot as prescriptions were being issued. I could notice passion on the faces of each member of the crew as they knew they were rescuing people’s future. We usually take it for granted, but imagine if you were prevented from seeing the world. Anyone who would offer you again that chance to see the light would be a savior! That’s what Aravind does, reaching out to even the easily forgotten people, down into the villages. There are many hospitals with far stronger and more advanced facilities than Aravind’s. But it takes more than knowledge and technology to do good to everyone. 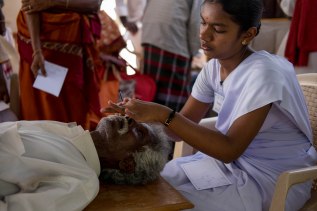 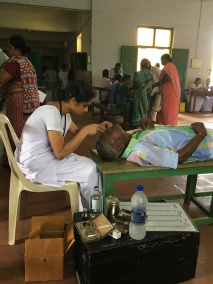 After having lunch around 2pm, we were due to return. A big bus full of patients had left earlier, taking them to Madurai Aravind eye hospital for surgery. At Aravind, doctors are so used to their miraculous work that an onlooker could confuse the operating room with their offices. For instance, I had to meet with a doctor to talk about my project. Unfortunately, or fortunately, he was so busy that he told me to find him the following day in the inpatient block, as he would be operating on patients. Happy to be in the surgeon outfit, I walked into the room and found him with an anesthetized patient, ready to be operated on. As soon as the surgery started, the meeting started as well. He was talking to me at the same time he was punching the patient’s eye with needles and all that. I was impressed. I wish I could tell the patient what was happening during the surgery.

Bottom line, Aravind’s staff shows more than capability. To quote Dr. Venkataswamy, the founder of Aravind Eye Care System, “Intelligence and capability are not enough. There must also be the joy of doing something beautiful. Being of service to God and humanity means going well beyond the sophistication of the best technology, to the humble demonstration of courtesy and compassion to each patient.” Dr. V said it all.

I am a student at Penn, in the College of Arts and Science, class of 2020. As of now, I intend to major in Logic, Information and Computation, while being on the pre-med track. For the summer of 2017, I am a CASI intern at Aravind Eye Care System, in Madurai, India.

"No Offense": Racial Sensitivity in an unfamiliar context