Ladakh is frequently called the “roof of the world” due to its high elevation on the Tibetan plateau. And if Ladakh is the roof of the world, Zanskar feels like the edge of that roof. South of Leh district, Zanskar is the most remote area of Ladakh, separated from the rest of the region by the Great Himalayan Mountain Range. Heavy snowfalls close all the mountain passes into Zanskar such that it is only accessible for four summer months; during the other eight months of the year, the region is cut off from the rest of the world. Even in the summer, getting to the capital “city” of Padam from Leh requires a 20-22 hour jeep ride, over half of which is on a relentlessly bumpy, one-lane road of dirt, gravel and rock.  The road, carved into the side of the Himalayas like a gash, is frequently interrupted by mountain streams. In their colloquial language, Zanskaris speak of “Ladakh” as a separate place and “Ladakhis” as a different people, underscoring the remoteness of the region. I spent the last two weeks of my research period in Zanskar, trying to understand how education functions in the most isolated region of Ladakh and one of the most remote places in India. 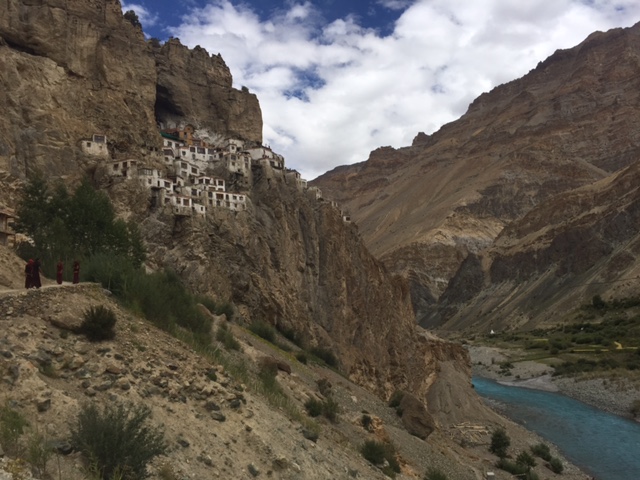 To visit the Phugthal Lobdra, a class 1-7 monastic school affiliated with the famous Zanskari monastery, I had to first take a three and a half hour jeep ride from Padam on yet another unpaved mountain road. Where the motorable portion ends, the road becomes a footpath through a gorge beside the Zanskar River, extending some 30 kilometers and crossing more than half a dozen mountains before reaching the distant monastery. The monastic school has about 40 students, aged 5-13, from all throughout Zanskar; some students must trek for more than a week just to reach the monastery from their village.

It was surreal to see the young monks reciting the abcs or the Hindi alphabet in a region that feels so cut off from the rest of India and the world. I shared a lot of laughter with some older students while talking about evolution, explaining why it was more difficult for Westerners like me to trek in such an altitude (the elevation hovers around 14,000 feet the whole trek) as opposed to Himalayan people. When I told them scientists had found Tibetans and Himalayans had a specific gene allowing them to process oxygen at very high altitudes, one student asked me, “Evolution, that’s the idea that says we come from monkeys?”

“Something like that. It’s the idea that all life changes over long periods of time to adapt to the particular environment.”

“So we’re more evolved than you? That’s why we can trek faster in the mountains?”

Ignoring my last statement, he said, “That makes sense. Look how much more hair you have on your arms than us; you must be closer to the monkeys!” 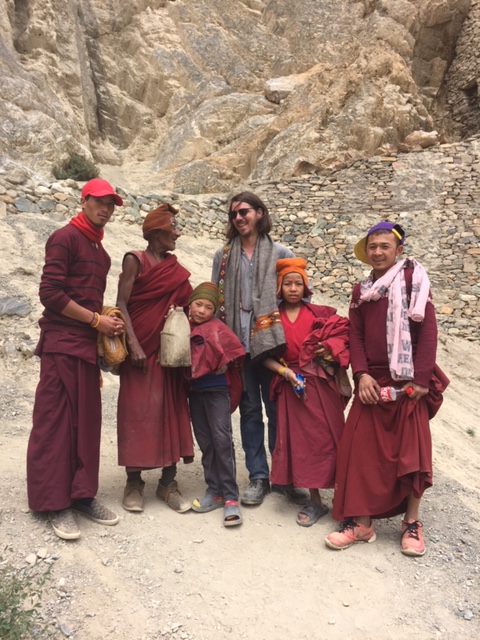 I visited three monastic schools in Zanskar and saw that while the monk-teachers were teaching the compulsory, Delhi-made curriculum, more emphasis was given to Tibetan language and traditional Buddhist studies. State-mandated subjects were taught collectively to a class; however each student had a personal Buddhist tutor, an older monk who was responsible for instructing them in scriptures, meditation and Buddhist ritual. This assures continuity in the traditional subjects of monastic education, which exists side-by-side with, but ultimately takes precedent over, the secular courses.

On completing their studies at the local monastic school, the monks and their parents then have a choice for them to either study at Duzin Photang School in Padam, a public school under Leh’s Central Institute of Buddhist Studies (CIBS), or go to Leh to study directly at CIBS. Both schools are directly funded by the central Indian government in Delhi and are administered completely separately from other Jammu and Kashmir schools. Sanskrit, English, math, science, and social studies courses follow an identical curriculum to other central Indian schools throughout the country. However, the schools under CIBS also require Bhoti (Ladakhi/Tibetan language) and Buddhist philosophy classes, both taught in the students’ mother tongue. Not only are all books, school supplies and tuition free, students receive a monthly stipend to study at the schools: 820 rupees for classes 1-8, 900 rupees for classes 9-10. If students successfully complete their entire grade 1-10 course of study, they will have received more than 110,000 rupees from the Indian government.

As is the case at CIBS in Leh, the financial incentive is such that a majority of students come from lower socio-economic backgrounds, with a majority of their parents having received no formal education and most illiterate. This generous support demonstrates the commitment of the central government to preserve and perpetuate the Indian Buddhist heritage lost everywhere in the subcontinent except the Himalayas.

I found the monastic schools a fascinating context because they are at the intersection of two highly contrasting systems of education. Both the secular education of the central Indian government and the traditional monastic education have distinct histories, aims and embedded worldviews. While from the perspective of one educational system it may seem easy to disparage the other, the monk-teachers I spoke with appreciate that both systems have their distinct value and importance. As one teacher told me, “His Holiness the Dalai Lama is always emphasizing that we have to be 21st century Buddhists, and that means understanding the Buddha’s teachings and not just blinding believing them. And modern subjects like science can help us with this. Ultimately, we’re monks and should know and practice Buddhism well. But we’re also Indian citizens and part of this world. Therefore, we should learn these modern subjects too.”

Patrick Dowd is completing his master's degree in international educational development from the University of Pennsylvania, where he has focused on indigenous education and language revitalization in the Tibetan-speaking Himalayas and Tibet. He is currently working with the education division of UNESCO Kathmandu as well as the constitutionally-established Language Commission of Nepal.

Tourism in Ladakh: A Mixed Bag

A Field Day with CORD