In the past, visiting and spending time in India for me has always meant being the “least Indian” one in any given group. Whether it was with family or at previous workplaces, I never consciously realized how American I always was in comparison to my Indian family or co-workers.

If I just recently started to understand that I experience India through Americanized ways, I am starting to realize that American bubbles can exist as well. Put multiple American students together, and despite the fact that you are in an entirely different country, the American Bubble will follow you and cocoon you everywhere.

This isn’t necessarily a bad thing. A friend from Penn who is currently in India on a Fulbright recently mentioned that she understands how Americanized her experience can be, but regardless she knows that this is likely the only way in which she will ever understand India. She accepts that as someone who is non-Indian and also American, the way she relates to India will not be the same way I do, or the way someone who grew up here does.

However, as someone who has perhaps seen India through ‘less Americanized’ ways in the past, this summer was unique and markedly different. Most importantly, my role as a visibly brown person traveling with two foreigners (my co-interns) renders me many different things to those that see us. Oftentimes, I am asked if I am the Indian host, boss or something of the like to Mallory and Alexi. Strangers on the street will ask me questions about where Mallory and Alexi are from, what they are doing here, and so on. Oftentimes, people are confused when I try to explain that all three of us actually attend the same university and are from the U.S., even though my family is Indian.

Mallory, Alexi, and I at the Taj Mahal with Swathi, an intern at another CASI site.

For example, we were at More (a grocery store) a few weeks ago and one of the cashiers greeted me and we started conversing in Telugu.

“Oh, you remember me and remember I’m Telugu!” I said.

He smiled and responded, “Yes, but I remembered you because you always come with foreigners, ma’am!”

In other words, my presence to strangers here has come to be defined almost entirely in relation to my non-Indian co-interns. When I’ve come to India in the past, I’ve never received nor expected any kind of visible preferential treatment. In fact, whenever I saw vendors or auto drivers flock to white foreign tourists, I have always felt frustrated, and then reflected about internalized racism and colonialism. However, this summer has been quite different in that sense. A friend of mine had mentioned to me, before I left for India, that I might receive “peripheral white privilege” when here with non-Indians. And while that did not make sense at the time, I can at least see what she might have been alluding to. The situations do not always feel so glorifying–it can actually often feel stressful or accessorizing to be approached as a point of access to others just because they are foreigners. However, it is clearly an effect of white privilege and colonial legacy that strangers give Mallory, Alexi, and I special treatment, or are at least extremely curious about us. 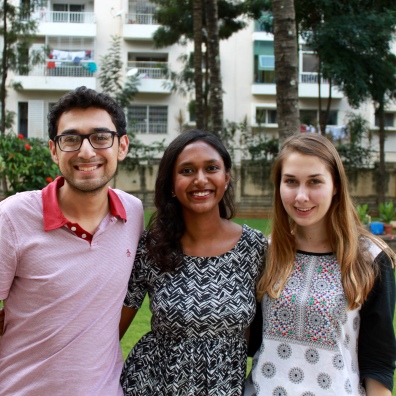 So while this is a new and difficult position to be in, it certainly has led to me learning new things about myself and the way I belong to India. Mallory, Alexi and I have also had many profound conversations on what it means for us to be here as American students, and what it means for me to be the only student of Indian origin in the group.

Reflecting on the summer and trying to better understand the larger picture, it is clear that race relations and colonial legacies larger than us shape the way the three of us interact with people around us. People are oftentimes excited to see foreigners, perhaps because of internalized racism and aspirations to whiteness and foreignness. I cannot say what the solution is for working through these dynamics, but I know that at least part of it is attempting to decolonize my own mind—ie process internalized racism and continue to have those difficult conversations.

As I prepare to head to Morocco for a semester abroad, where (as Alexi often said about his own experience here) my Americanness will perhaps precede by browness, it will be interesting to take these lessons with me and continue to grow from them.

I am a rising junior at the University of Pennsylvania, working in Bengaluru, India through CASI (Center for Advanced Study of India) this summer! Looking forward to being back in my motherland and learning, growing, and hopefully contributing respectfully to my workplace.