Nearly a month ago, I headed to Mandu with Andrew, Sasha, Nishtha, Prasann, Abhi, and Ashley. Nishtha, Prasann, and Abhi are SPS professionals who work with the organization’s Self-Help Groups, while Ashley was a Master’s research fellow from the University of Arizona. Although we were tired from a late night at the office the day before, we hopped into the jeep around 5:00am and traveled for the next 4.5 hours southwest to the archeological site of Mandu.

Looking out from the base of Mandu.

Beautiful greenery at the base of Mandu. 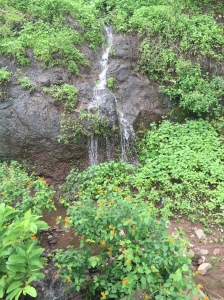 Waterfall at the base of Mandu.

According to Sanskrit text, the city of Mandu was built in the 6th century BC and is characterized by a long history of invasions. Between the 10th and 11th centuries it fell under the ownership of the Parmars, Khiljis, and finally the Taranga Kingdom through a number of battles. In the 16th century, Akbar the 1st also claimed Mandu under the Mughal Empire, until it was once again taken by the Marathas during the first half of the 18th century.

Mandu consists of a number of noteworthy sites. The three that we visited were the Jahaz Mahal (or Ship Palace), Jami Masjid (mosque), and Roopmati’s Pavilion.

Roopmati’s Pavilion through the thick fog and monsoon rains.

I was excited to visit Mandu for a number of reasons other than its archeological and historical significance. I had read about Mandu in several articles regarding the best places to visit in India during the monsoon season, as it is known for its verdant beauty and charm. I was not disappointed! Trees, flowers, and waterfalls painted the landscape. It was also my first time traveling someplace as a tourist in India. I had gone to Indore a few weeks before that for Domino’s Pizza, the Bollywood “Dil Dhadakne Do,” and to restock on snacks; however, I don’t think that counts! Andrew and I also arrived quite late in Delhi and only had the opportunity to grab dinner at Hauz Khas the evening before we left for SPS. Finally, my colleagues, as well as past SPS CASI interns, spoke highly of Mandu – it is now an SPS tradition of sorts to take interns to the site.

Me at Jahaz Mahal

I was blown away by the ancient structures at the three locations. I have always been fascinated by archeological sites and had actually contemplated pursuing archeology when I was in high school, because I wanted to work in Latin America studying Mayan ruins. I am not only attracted to the physical beauty of the buildings, but also the mystery and history associated with them. While at Jahaz Mahal, I wondered what palace life was like for its residents. Nishtha, who served as a great guide at Mandu, told us about the ceremonies that would take place in certain sections of the palace. Furthermore, she led us to a bathhouse, which had star-like shapes cutout overhead. We theorized what it must have been like to bathe at night under the moonlight – the cutouts reflecting stars against the interior walls and floor. This image followed me as we walked towards the exit in the pouring rain.

Jami Masjid and Roopmati’s Pavilion were also quite beautiful; however, thick fog and heavy rains had set in right as we were nearing Roopmati’s Pavilion (sorry for the lack of photos!). We had almost considered not going to the last site, but we trudged on nevertheless. As we scaled the steep incline needed to reach the pavilion, thunder resounded softly in the distant hillsides. Around us, women and men were cooking roadside corn-on-the-cob (something I sadly did not eat before I left India), the smell reminding me of fond summer memories from the San Diego County Fair. At the pavilion, I looked over at a sea of fog, which obscured the Narmada River and the bustle of vendors and tourists down below.

Roopmati’s Pavilion was constructed in the 16th century for the singer, Rani Rupmati. She was married to Sultan Baz Bahadur, and was one reason Mandu was conquered by Akbar. The general under Akbar, Adham Khan, decided to invade Mandu, because he had heard of Rupmati’s beauty. Rupmati responded to the invasion by committing suicide via poison. Below is a passage from Wikipedia about the lore of Rupmati (https://en.wikipedia.org/wiki/Roopmati):

“Baz Bahadur, ever so fond of music, was the last independent ruler of Mandu. Once out hunting, Baz Bahadur chanced upon a shepherdess frolicking and singing with her friends. Smitten by both her enchanting beauty and her melodius voice, he begged Roopmati to accompany him to his capital. Roopmati agreed to go to Mandu on the condition that she would live in a palace within sight of her beloved and venerated river, Narmada… Unfortunately, the romance of this Muslim prince and Hindu shepherdess was doomed to failure. The great Mughal Akbar decided to invade Mandu and capture Roopmati and Baz Bahadur. Akbar sent Adham Khan to capture Mandu and Baz Bahadur went to challenge him with his small army. No match for the great Mughal army, Mandu was easily defeated fell. Baz Bahadur fled to Chittorgarh to seek help. As Adham Khan came to Mandu, was surprised by the beauty of Roopmati and Rani Roopmati stoically poisoned herself to avoid capture. Thus ended this magical love story steeped in music, poetry and beauty”

Aside from its history and mythology, I was also captivated by the presence of nomadic Rajasthani tribes. As we climbed the green mountains on our way to Mandu, we passed by sheep, goats, lambs, camels, and members of the far-flung tribe. Tribal peoples travel hundreds of miles southward by camel and foot to the more vegetative state of Madhya Pradesh to provide pasturelands for their livestock to graze on during the monsoon period. I was amazed by the shear number of sheep (pun intended) we drove past, as well as the towering camels, which were holding children and goats in their side pouches. It was definitely an amazing site to see, which I have added videos of below (please ignore my commentary).

I will hold on to these memories from my day at Mandu. Although the journey was long (9 hours to and from – we got back home close to midnight), it was well worth it. It has a wealth of culture, history, and beauty unlike most other places in India or around the world.

Our group minus our photographer, Andrew, at Jami Masjid. Left to Right: Nishtha, Prasann’s friend, Sasha, Ashley, Prasann, Abhi, and me.

Following the Footsteps of a Barefoot Veterinarian