Outer Ring Road (ORR) is a fantastic highway that encircles the city of Hyderabad. The medians contain a spectrum of colorful flowers, the lanes are wide, and best of all; traffic maintains a speed greater than 60km/hr. In the first week of my research, I experienced much of this circular road and have now been back in the round to visit the Hyderabad College of Veterinary Science and the nearby Nehru Zoological Park. My first stop at the veterinary institution allowed me to see the resources available to students, current research projects, and a menagerie of livestock and laboratory animals. The school tour fell on Tuesday, July 28th which happened to be declared a day off for school and government institutions in honor of the death of a past president, Abdul Kalam, on the previous day.  Although there were less students milling about the halls during my tour, I was still able to fill three hours of the morning seeing fascinating anatomical specimens, parasite collections  (who doesn’t like tapeworms and liver flukes?), laboratories, and animals. Much of what I learned helped me to see the trajectory of veterinary research and medicine in the area and allowed me to meet some new friends as well. 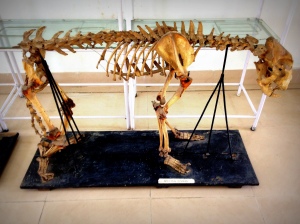 A Leopard Skeleton in the Anatomy Museum

My next stop of the day was to admittedly to fulfill a personal bucket list aspiration. I have, to put it lightly, a strong interest in bovines and I have always wanted to see the largest bovine breed to presently walk our Earth; the Gaur. The Gaur, known here as the Indian bison, is a fantastic creature whose massive withers at 6ft reach the height of the windows on a coach bus (If you’d like to, just do a quite jaunt through Google images for confirmation). They exist in scattered groups throughout South and Southeast Asia and have never been domesticated. When I entered through the archways and ticket lines of the zoo, my first stop was at the park map that is proudly displayed in front of the ‘tiger train’ ride that travels around various exhibits. With excitement, I pointed out the location of the Gaur exhibit (on the opposite side of the expansive park) to my slightly less-enthused driver for the day who  graciously decided to accompany me on my excursion. Nodding his head in the typical, ‘okay, yes, maybe’ way, he smiled and told me this speed walking meant he could eat more biscuits (cookies) later.  Weaving through primate enclosures, a butterfly garden, and even exhibits with life-sized dinosaur models was the perfect prelude to gazing through the fence at the herd of gaurs among the trees. I was even surprised at the number of large cat exhibits and thoroughly enjoyed seeing Bengal tigers, leopards, and jaguars roam about in their native climate. Oh yes! Of course there were Indian elephants too.

After a satisfying mental check off the bucket list, my driver and I ended the afternoon with Irani chai tea and osmania biscuits which are both famous and delicious concoctions in Hyderabad. We also climbed the white marble steps of Birla Mandir temple and gazed down on the backs of brown hawks soaring out to the lake and the sea of buildings that stretch beyond the horizon.  Satisfied with a day of adventures, we again moved along on the circle of the ORR back around to settle again at the research facility.

I am a third year veterinary student at the University of Pennsylvania that loves livestock and undertaking local and international adventures. I am learning to combine these interests in the cattle rich fields of India this summer and seeing firsthand how veterinary medicine can be used to develop and support rural communities.