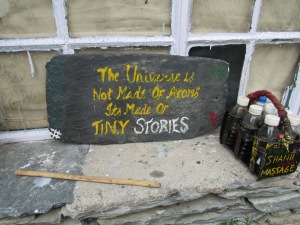 Okay, fine I know I can’t leave it at that. As an extrovert, I crave human interactions as a way to energize myself. Being alone too long leaves me restless and deflated. Another thing that I guess is interesting about this experience for me is that I’m used to talking through my experiences with other people. It helps me process. I know it sounds dumb. Like, Kendra you can’t just look at a mountain and understand that it’s a mountain? Well, yes. I guess I just thought that witnessing beautiful scenes alone would give me profound thoughts or lead me to the meaning of life, but my mind is coming up blank. Everyone always talks about enjoying alone time and here I am constantly pinching myself: Are you enjoying it yet? Being alone is fun, right? RIGHT?! 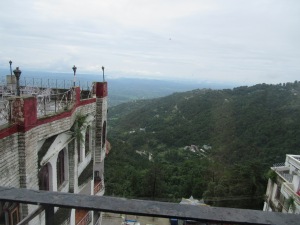 Part of it is that I spend so much time being careful and worrying about my safety when I’d rather be meeting people and making friends. Yesterday I walked from Mcleodganj, where I’m staying in the Dharamsala area of Himachal Pradesh, all the way to the Bhagsu Waterfall. I noticed on the way that it was mostly couples and men or groups of men. A few men tried to join me on my way up. I was really careful about this and moved away from them. Finally, when I reached the popular Shiva Café at near the top of the mountain I stopped to go in. There were only about 4 tables and cushions on the ground to sit but three out of the four tables were occupied by groups of men smoking hookah. The café was really cool and I wanted to spend time there but was conflicted by the intimidating male-dominated vibe. I ended up ordering food and eating it quickly (sitting at the least occupied table I could find) and leaving.

On my way back down the waterfall I ran into two women and two men who asked me where Shiva Café was. I pointed them in the right direction and asked where they were from. Delhi. One of the women said I could join them after I explained why I left so quickly. I went back up the mountain with them and chatted for a bit. The mist came down hard and it looked like it might rain. I did not want to be stuck on the mountain for long and one of the men who had tried to join me had also just reached the café. I was desperate for people to talk to, but decided to head back to town just to be safe.

Because I do not like to be out alone in the dark I have a lot of time to myself in the evenings at my hotel. Saturday night I spent a good hour or two attempting to wrap my saree. The Internet helped get me close, but I’m still missing something and get tangled up at the end every time. Last night I looked through old pictures on my phone. I look so different now from how I did during the school year. While in India I cut down on my (already pretty small) makeup routine and now that I feel like I’m in the middle of nowhere alone I have stopped wearing makeup or putting in contacts at all. It’s kind of nice, but I’ll be happy to go back home to all of my cosmetic products and a shower where I don’t have to put on the boiler 30 minutes before I need hot water. Mostly though, I’ll be happy to be reunited with my friends.

NO MAKEUP OMG. Taken by a nice couple. The man was taking pictures of his wife so I offered to take one of both of them in exchange for this.

There are some positives though: 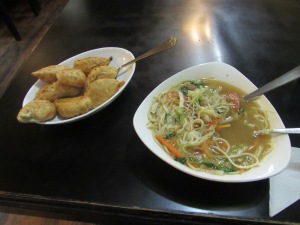 Fried momos and thukpa. Dharamsala and specifically the Mcleodganj region where I’m staying are known for being home to a large community of Tibetans in exile as well as the Dalai Lama. It is not uncommon to see Buddhist monks sitting in cafes drinking tea and browsing iPads.

One of many coffee drinks consumed.

In some ways I almost wish I had just gone straight from Bangalore home. It would have been an easy way to cap my experiences. To say “that was India” and call it a day. But as you may have gleaned from my last blog post, I had a huge support network in Bangalore. Adjusting to life in one of India’s more cosmopolitan cities was no huge deal when I had coworkers looking out for me and five other Penn students to hang out with on the weekends (s/o to Bengalu-cru if you’re reading this). 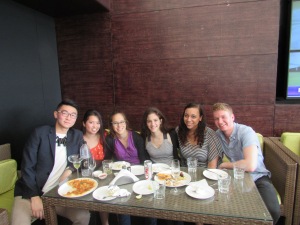 My best friend from home and I have a sort of running joke about how I’m not very mature. Compared to Maddie, who spent three months in Peru before starting college on the opposite coast from where we grew up, I haven’t done many things in life completely independently. Before I left for the summer she said she thought this trip might help me to grow out of that child-like feeling I had. In Bangalore I felt like I was always cared for and looked after. But after a SNAFU trying to get to my bus in Delhi (that included riding in the non-women’s-only metro carriages and a ride on an actual manual rickshaw at night) and a few days alone in the Himalayas, I do feel a little different. If I had just gone home after Bangalore, my goodbye to India would have been like leaving summer camp. Bye to all my old friends, and please keep in touch. But now I’m saying goodbye to strangers and acquaintances and a place I conquered myself.

All that being said, I think I’m ready to come home now, which is perfect timing since I leave in less than three days.