As I described it in my previous post, empathizing with Shahi workers (especially incoming migrant workers) and establishing proper communication with them is often challenging. When I came into this internship, I had thought that, somehow, the proximity of our ages would strongly play in my favor, that it would enable the girls and me to relate to one another and establish some kind of proximity and complicity.

However, I soon realized that being and looking the same age and being as smiley and friendly as I could was not enough to erase the terrified -sometimes even glaring- looks I would sometimes get when I made them come to me for interviews. You could make a point that being the same age is not enough to outweigh the other fundamental differences in our upbringing, the cultural and linguistics barriers that exist between us. However, I think that, in this case, it is first of all the fundamental nature of the setting that created the communication barrier: a setting in which I am the interviewer, I have the power to ask the worker what I want, but in which she knows nothing about me. Intimidating for her but also a little awkward for me, because I am aware that the fact that I am the one who is sitting in the interviewer’s chair today -and not her- is the result of pure hazard. Fundamentally, I do not deserve this position any more than she does.

Hence, once a girl is sitting in front of me and I am about to ask her questions, it is usually hard for me to overcome the communication malaise created by the situation. When in such a situation, I try to make my interlocutor feel more empowered and informed about the situation by presenting my objective and myself first or by asking her if she has any questions about me. But really, I feel that nothing has been more effective than hostel/village visits and good old icebreakers!

When we were conducting hostel visits during the weekend with our boss Chitra, we found that the girls were generally more lively and opened to talking. I think one of the main reasons for this was that we were interacting in an environment in which they were our hosts, and us, their guests (as scenario almost opposite to the interview setting we used in the factory).

Moreover, we found that scenarios in which the workers would be the ones teaching us something or leading the activity were also favorable to good interaction and trust. While visiting one of the training centers in Orissa, a few girls we met mentioned how much they enjoyed dancing. (After a little pep talk), these girls performed a dance number for all of us. Somehow at some point, I was dragged onto the “imaginary “ stage, and encouraged to copy their dance steps. I was then integrated in a frenzied spinning polka dance circle and then summoned into a waltz with one of the workers. The energy level of the room reached its peak; everybody was clapping and laughing. I was having a lot of fun and began feeling more at ease… and so did they, it seems. 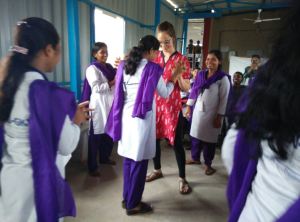 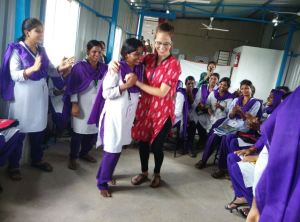 … before getting in the groove

Which brings me to topic of icebreakers: at Shahi, people know that there is no best way to start a meeting than with a fun game which preferably involves jumping around or running. As part of the buddy system scheme I have designed for new incoming migrant workers, supervisors get introduced to junior and senior buddies during a formal meeting on the second week of the scheme. During the meeting, junior and senior buddies can also raise concerns and questions with their supervisors. To make the atmosphere more relaxed before the Q& A session (new joiners at Shahi often perceive their supervisors as an intimidating figure), we had all of juniors; seniors and supervisors play a game of “protect your balloon”. Every player ties a small balloon to one of his ankle and must run around and try to pop everybody else’s while protecting his. I had not suspected that these shy looking girls would be able to play so fiercely…

To get a better idea of what I am talking about, you can look at this video I took of the game. I know it is quite long (so feel free to skip parts of it), but my favorite moment is on second 56 when a junior buddy sneaks in and attacks a supervisor from behind. (btw: in this video, all the men who are playing the game are supervisors)

I'm in the college, class of 2017. I'm majoring in Physics and minoring in Computer science. I'm interning at SHAHI exports this summer.

Travelling Alone as an Extrovert