With just under four weeks remaining in my CORD internship, I have reached the peak intensity of my work in the field. But if I’m being really honest, it doesn’t feel much like work. When I think of the word “work,” it seems to me to have an almost negative connotation, as if to imply that something is laborious to the point of being undesirable or objectionable. “Work” makes me think of something I wouldn’t want to do. That certainly isn’t the case here. If I feel passionate about it, as is the case with spending time with farmers in the villages here, defining it as work doesn’t quite do justice to that exhilarating sense of adventure I experience.

Let me take a step back for a moment and provide some context. For my Nutrition and Food Security project, my goal is to interview 30 women farmers, who are direct beneficiaries of CORD, about their nutritional and health practices, particularly those for their young children. The women I interview all have one or more children under the age of 5, as the age range of 0-59 months is a critical growth period for children; hence, the emphasis on food intake.

While the interviews themselves are certainly a joy to undertake, they are not the source of adventure out there in the field. The adventure lies in finding the people I want to interview. Each day I travel to a different Panchayat, or village district. The Panchayats are pretty large, and the 4 or 5 people I seek to interview in each Panchayat are not clustered in one area, but spread throughout. Furthermore, nobody really has an “address” as they would in the U.S. or elsewhere. Let’s say I want to interview a woman farmer who lives in the Panchayat Jassour. All I know is that she lives in some Ward within Jassour. Not a lot of information to go on, right? 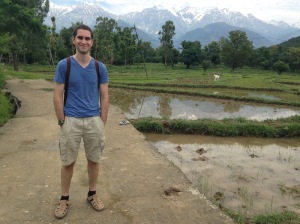 So my translator, Uday, and I are tasked with locating the farmers whom I want to speak to, which becomes a quest in itself. Sometimes we go house to house asking where someone lives; sometimes we’ll ask the worker at the Anganwadi Center (a place providing basic health care in the villages, especially for mothers and children); and sometimes we just get lost. Lost in the midst of crops, trees, lush vegetation, towering mountains and a heck of a lot of cows and chickens. It is nothing short of a quest. We brave steep slopes, leap over small streams, and hover on the edge of cliffs. We ask, we point, we move on. We sweat and we search. Inquire and investigate. 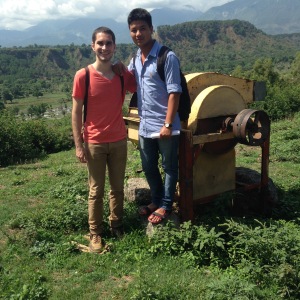 I love every second of it. The field quest is a liberating one. It fuses adventure with application of the intellectual tools I have learned at Penn, and merges knowledge with passion.

Oh, and the kids are adorable. Yesterday I was in the Panchayat Bhuned, and got to hold a baby. Her mother said she was always mistrustful of strangers, and that it was a wonder I could pick her up without conjuring cries of protest. I’m pretty sure my face turned slightly red at that point; needless to say, I was pleased. During my last interview of the day in Bhuned, a bunch of kids from neighboring households came crowding to see what was going on, poking curious glances. I finished by taking a picture with the whole group! (see below)

The baby who didn’t cry

Class of 2016, Majoring in Health and Societies with a concentration in Public Health. Intern at CASI CORD, summer 2015.