It’s been almost two weeks since my last post, and I wanted to share a few updates.

I am currently working on implementing a “buddy” system: each incoming migrant female worker (aka “fresher”) will be paired up with a more experienced worker living in the same hostel. The “senior buddy” will be in charge of helping the fresher solve her problems and feel more at home. The buddy system will mainly target migrants from Orissa (poor rural region in the North East of India), as they are the ones that suffer the greatest lifestyle change. Orissa migrants often come from very poor families, have been brought up on a very different food, and are usually overwhelmed from the sudden exposure to the fast paced city life. But, most importantly, many of them do not speak Kannada or Hindi, making it very difficult for them to communicate with the outside world as well as with their work supervisor.

Part of my research involves finding out about existing related resources/schemes and assessing their effectiveness. For example, I have sought to assess a different buddy system that is still in its beginning phases, which already exists in unit 12. My first step was therefore to visit unit 12 and to collect useful information. Sounds easy right? So I thought myself… In fact it appeared that collecting such data was in fact really challenging.

At this point, I thought it would be interesting to reflect on one of the practical difficulties all of us have been confronted with at least once during this internship: receiving precise and accurate data from various departments, groups, and individuals within the factory. The veiling of information is certainly frustrating, but if we think about it, this behavior is also relatively understandable.

The garment industry is extremely regulated and is subject to constant pressures by various external parties. Such pressures, on the whole, yield positive effects: they ensure that workers’ rights and safety are respected. In some cases, however, these pressures are exerted in a manner that reflects the regulators’ lack of understanding of factory life. These regulations can disrupt internal order and slow things down. One consequence is that people at Shahi have learned to be cautious and to not entrust any visitor.

Because people from other units do not know us, their natural inclination is to view us as outsiders trying to sneak out information that could some day be used against them. Thus, to avoid receiving unnecessarily adorned information, our job is to effectively communicate our true “unharming” intentions to them. Chitra (our supervisor and mentor) has made us practice a little introduction spiel “we are not from the brands, we are merely students from the USA doing research… the research we conduct will be used to directly benefit you…etc.”, and has somewhat briefed us on the behavior to adopt in order to initially gain people’s trust and obtain useful information. I think we are slowly getting better at it, but work still needs to be done (as you can see from my questionable success at obtaining correct information relative to buddy scheme in unit 12). Anyway, once I master this communication and persuasion skill (if I ever manage to), I think it will be one of the most important professional take aways from this internship. As the internship progresses, I also hope to get a better understanding of the power dynamics of the company at every level. Indeed, I believe it would enable us to behave more tactfully, as well as to gain a better understanding of the origin and intricacy of many problems.

Last Sunday, Amy, Kendra and I decided to do something touristy (for a change!) in Bangalore and visited the Bangalore palace. I say it was touristy because once we arrived there, we realized that a significant number of visitors were non-Indians. We even got nice Dutch man to take a great photo of us!

Equipped with audio guides, we toured the palace. The experience was slightly unsettling at first: I think I was initially expecting to be confronted to authentic “Indian” style (Although I’m not sure exactly what Indian style would mean since the country is so diverse). In my ignorance, I had probably been picturing the palace to be some kind of miniature modern version of the Taj Mahal). Instead, the architecture we witnessed was a mix of different influences. The palace was built in the late 19th century, while the country was still under British rule, so it is not so surprising that it predominantly followed an English-derived style, “Tudor architecture”. According to our guide, the palace was inspired by Windsor castle in England. (If you look at the following pictures you can probably spot some similarities) 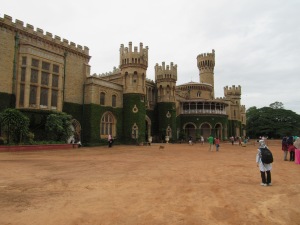 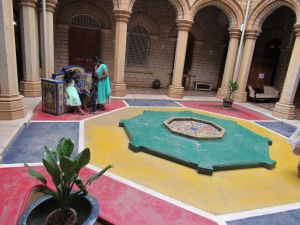 However, there was definitely- if I may say- a unique “Indian” twist to the interior design and furniture of the palace.

Stuffed elephant head, hunting trophy brought back by one of the princes who used to inhabit the palace.

I'm in the college, class of 2017. I'm majoring in Physics and minoring in Computer science. I'm interning at SHAHI exports this summer.

Getting Oriented: A New Perspective on Going to the Bathroom