Geological term for a rock composed of many fragments

Hindi word for “will meet”

In Bangalore you will find road signs, stores, restaurants, etc., written in both English and Kannada, the native language in Karnataka. Most people here are “managing” multiple languages. Last Thursday alone I heard one of my supervisors at Shahi (Chitra) use English, Kannada, Hindi, and Tulu (spoken in her native, Mangalore) all for business discussions and transactions. However, get into a Ola Cab or an Uber and try to explain a destination to your driver and you may encounter some communication issues. The gap here is a mix of class and education level. 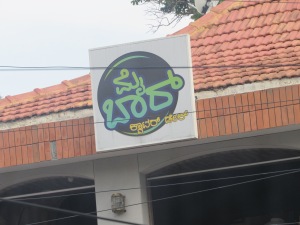 Imagine, just for a moment, that you are from a rural village and had never seen a city before. There are no jobs available to you at home because of your gender. You get a job offer and after training for a couple of months in your home village, you travel to a city for the first time. Everyone is speaking a language you do not understand. When you listen and try to replicate what you’ve heard to a fruit vendor on the street, they laugh. The road signs are in two languages, neither of which you have been taught, or even use the same alphabet as you’re used to. When you go to work, your supervisor yells because you do not understand. A few people in your workplace speak a language you understand, but are not fluent in. Their instruction helps, but it is still difficult to communicate.

To give you an idea, Hindi and Oriya (which many of Shahi’s migrant workers speak) both belong to the vast and intricate family of languages known as Indo-European, which includes everything from English to Russian to Persian. Kannada belongs to a completely separate language family called the Dravidian languages.

Graphical representation of the Indo-European language family, taken from the Internet. Notice Dravidian languages are nowhere to be found!

From what I can tell, multilingualism is almost taken for granted in India. Because there are so many languages spoken here and so many people can speak more than one, it’s easy to say that the migrant workers will eventually just “figure it out” or learn to “manage” Kannada within a few months. That’s an English phrase many people here seem fond of: “I can manage.” Do you need help carrying that suitcase? No, I can manage. How does Human Resources make themselves accessible to the Oriya girls when they first come to work? We can manage Oriya, and they can manage Hindi. If you’ve ever been in a conversation where one party wasn’t fluent in the language the conversation was being carried out in, you know that there is a lot that gets lost in translation. I suspect that simply “managing” isn’t enough.

Coming from a background in sociolinguistics, I see this as a problem. Thus, the project I have decided to work on this summer will be more of a research project. The garment manufacturing industry faces the problem of high attrition rates. With a primarily female workforce, sometimes the stress of a full-time job added on to domestic responsibilities proves too much to handle. Sometimes the money simply isn’t enough. Sometimes the younger workers get married and have to move, or their husband forbids them from working. But for the thousands of workers that are migrants from other states in India, sometimes the adjustment to Bangalore life is simply too much.

I want to look into what’s really happening to these Oriya girls when they come to work. So far I’ve heard only anecdotes: the vendors joke and call them “Hindi girls,” they can’t tell if their Kannada-speaking supervisor is trying to encourage them or berate them, they get passed up for promotions simply because Kannada supervisors favor Kannada-workers.

There are whispers of worse. Language can manipulate. Oriya women have been susceptible in the past to abuse from Kannada boys and Kannada women alike, the result of which may contribute to the large problem of human trafficking. Though no one likes to speak of it, the garment industry has been eerily linked to the sex industry in Karnataka for years. Companies like Shahi have few options in this situation as it is nearly impossible to identify women who are involved..

All this said, I hope to direct attention to the issue of language use and how it affects migrant workers’ access to resources, advancement, and quality of life. It’s truly not enough to “manage” a language if a young woman is meant to survive in a city.

The fine dining experiences have continued. Valentine and I followed one of our supervisors, Chitra, to a factory in a region Northwest in Bangalore called Peenya. Afterwards we had lunch at a really nice restaurant specializing in food from Mangalore, Chitra’s native!

Chitra in her beautiful work sari

Outside of work, the other Shahi interns and I have been well. We have gone out with coworkers to karaoke, as well as meeting up with the other Bangalore interns Jacob and Kevin to experience some of the night life. We took off work on Saturday and visited Lal Bagh Botanical Gardens, which was beautiful beyond compare.

Chan hamming it up

Close up of the rock steps Chan was climbing on

View from the top of the rocks! 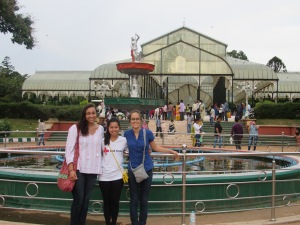 Missing Amy, who was home sick 😦

On Sunday we did more intern work. We visited three hostels (basically dormitories where migrant workers stay). We ate lunch at a nice restaurant called “Melange” which is where I got the idea for the theme of this post. The restaurant had Indian, Chinese, and continental food. Valentine figured the restaurant was named for the French word meaning “mix.” But the waiter said it was named for the Hindi word. Our supervisor wasn’t sure of this, but Google Translate claims that there is a similar word in Hindi meaning “will meet.” In a way, they are sort of the same thing.

Women waving goodbye to us after our visit to their hostel.