India is hot. Like really hot. Like Philadelphia when you first get there your freshman year and you found out your made the poor decision of living in Hill …… except more hot. The instant that I finally set foot in Indira Gandhi International Airport in Delhi, after an unfortunate series of twists and turns in New York and JFK airport, it was as though someone turn on a blow dryer ….. and left it on. It isn’t like one of those small ones that you pack with you on vacations. It like a massive one blowing against every part of you from all direction. The sun was smiling, probably laughing at what a good job she’s doing. It was hot.

Photo 1: These are waterbottles. They can sometimes help take my thirst away….. sometimes…

This would take a little getting used to. 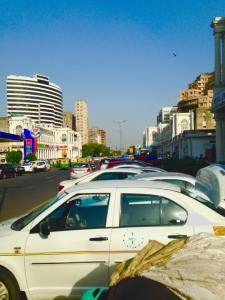 India is busy. See the little strip of road to the left of that picture. Well, that’s probably the only bit of road in the whole city that is not occupied by tuk tuk or otherwise. It was actually quite calming. Hey look!

Photo 3: Seconds before we get swarmed by a worthy set of businessmen

Janpath market is really quite something, isn’t it? It’s busy, but busily colorful, right? So many colors, “cramped” into one long path of bargaining and bargaining. “1700 Rupees?” “Good bye! Good bye!!” The street is many blocks long, saturated with people, hotness, and colors. I’m sure I can find it for 1600 Rs. And we walked on. Perhaps it’s a bit slower at night?

Photo 4 & 5: India gate is very impressive. We are a very happy bunch.

It’s the same. The amount of enthusiasm that the street cultivate is phenomenal. Tired, lost, and jetlagged us seemed to be upheld really, really well by the lights, honks, and the joyful screams of the people running around and around, getting most of their nights.

India is tasty. I meant from “American diners” to the street vendors. Nothing seemed to disappoint. Not even the “American diner.” Not “even” that. From Idli and Paratha, to Aloo Gobi and Shahi Paneer, everything that goes in satisfies…… at least for a little while. You can find food in every street, on every corner. You can always see people roasting something, or mixing something. 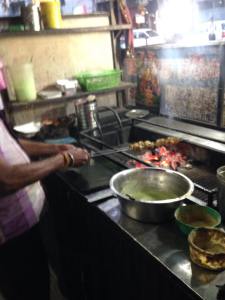 Photo 6: (Left) Street Vendor frying some bread stuff and then pouring some green stuff for me

It was delicious. Oh did I mention the mangos? Did I mention the chai? Did I mention that I tried to order 20 cups from a place that I normally order from, and the store owner though I was going insane? It’s probably from the heat. Everything is prepared with a delicate sense of care that is really unseen in most of the places that I have been and grown up in. Every bit is met with immense flavor that just explodes.

India is awesome… so far 😉 (Stay tuned for more awesomeness)

Class of 2018, Computer Engineering. Intern at LEAP in Yamuna Nagar, Haryana in Summer 2015. Education is scalable. Considering that I am also an international student at Penn, I find it fitting to contribute back to the international community. I find great joy in transforming my learning into a form of knowledge for others. Especially passionate about engineering, I believe I may be able to tackle issues from different perspectives and make it fun for others while doing so.

How is it already June?