I had to do a double take when I was writing the date for this blog post because I could not believe that it is already June 4. We will now be beginning week 3 at Aravind, and the work keeps rolling along. Beyond work, we have been trying to see some of Madurai. I did not know too much about Madurai, when I arrived, but it is actually quite a major city in the southern state of Tamil Nadu. It is the third largest city by population in the state, and it is actually a very historic city of its own right. There is a written history of the city that dates back more than 2000 years, and simply walking around the city and observing some of the ancient temples conveys a sense of its antiquity.

Our work-week is from Monday-Saturday, and so Sundays generally seem to be the best day to explore. On our first Sunday in Madurai, we decided to see the most historic building in the city, the Meenakshi Temple. It is believed that the temple was built around 400 years ago, dedicated to the Hindu goddess Parvati, of whom Meenakshi was an avatar. We woke up early in the morning and arrived at the temple after taking a short auto-rickshaw ride from our hostel. There are a host of shrines inside of the temple grounds that are beautifully laid out; one of the shrines to Meenakshi that is known for its beauty, serving as a center for attraction in the temple, unfortunately had a prohibitively long line that prevented any of us from actually getting in and seeing it. However, I was able to visit other shrines to the god Ganesha and various other deities. In one of the halls of the temple, I actually saw a temple elephant sitting docilely and receiving all comers who sought to touch and pray before it (definitely very cool to see an elephant, but I could not help but feel that it didn’t seem quite as overjoyed as the people… It turns out that lives of temple elephants aren’t necessarily very glamorous: you can check this out if you are interested in some darker reading about the existence of a temple elephant http://www.frontline.in/the-nation/the-pain-of-being-a-temple-elephant/article5749412.ece).

The most striking feature of the temple, though, is a series of tower-gates, known as gopurams that surround the temple grounds and mark entrances. Each of these towers is ornately decorated with sculptures of an assortment of gods and animals. Here is a picture I took of a gopuram from inside the temple, though I am afraid the quality is not terribly high. 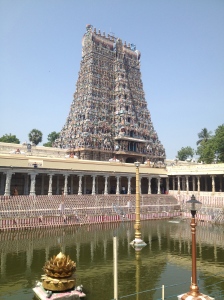 At one point that morning, I did one quick walk around of the entire exterior of the temple grounds to get a sense for the scale of the grounds (the size is bigger than you might expect for a temple, but still a doable-10-to-15-minute walk for a complete loop) and see each of the gopurams. The thing that struck me most was how “new,” each perfectly sculpted character seemed; I suppose it was the meticulous precision of the towers that lent this sentiment despite the 400+ year age. The bustling markets just off of the temple also probably contributed to the curious sense that you were treading both ancient and contemporary. Upon reflection, the Meenakshi temple is itself a bit of a paradox of the ancient and contemporary: sure, it is 400 years old, but in the context of a 2000 year-old city, it is just the most recent chapter. I am perhaps not capturing it very eloquently, but I am getting the sense that Madurai is a city steeped in many layers of history and tradition. You can start looking at history from the last 100 years when Gandhi famously dawned his iconic loins in the city. Then keep peeling back farther into the history to hit the days of the British and the East India Company. And then you can peel back farther to the building of the Meenakshi Temple. And incredibly, you still have 1600 more years to peel back. It’s a kind of sense that I don’t know if I have ever gotten in an American city; probably because the history of American cities tends to be on the order of centuries instead of millennia (that’s not to say that there is anything wrong with American cities though! Or that there is anything wrong with something without too much history or culture- I have to confess that Olivia and I went on a bit of an, “un-cultural” adventure in search of some Domino’s pizza today. It was good to get a bit of a taste from the States, though there was definitely also a taste of Madurai in the experience as we got lost several times, got into a couple of bargaining wars with some rickshaw drivers, and saw some friends from Aravind walking around the city).

This week we heard a talk at Aravind by a social activist, who is from Madurai and started an organization called Green Walks, which is devoted to leading treks to historic shrines and cave-drawings that are often between 1000-2000 years old in the mountains around Madurai. Inspired by the talk, Busra, Olivia, and I are planning on Sunday to try to do one of the treks that Green Walks has already done at a mountain called Yanamalai that is 8km outside of Madurai. It promises to be another adventure into the history and identity of Madurai; hopefully, I’ll have a few more layers of Madurai to report on next time.

Rising Senior in the Roy and Diana Vagelos Life Sciences and management Dual Degree program, majoring in Biology and concentrating in BEPP and HCMG at Wharton. Intern at Aravind Eye Care Systems in Madurai Tamil Nadu for summer 2015.

How is it already June?