It’s been over a week since my internship group set foot in the mountainous terrain inhabited by the villagers of Sidhbari and beyond in District Kangra. The sights are beautiful to witness. Vast, towering mountains with snow on the peaks, creating a sense of awe in the beholder that never seems to diminish. Farms with lush vegetation and crops almost ready for harvest. Streams running through the hillside with children playfully meandering about. And, only a few minutes away from the ponderous tranquility of the countryside, streets bearing the boisterous bustle of honking scooters and buses, and auto-Rickshaws swerving to the sides of the roads to avoid traffic; noise that some would deem chaos, but others would call everyday life.

Trekking in the Himalayas

But it’s not only the mountains or the contrasting scenes of daily living that impress and inspire. The landscape is also permeated by a strong sense of community that seems to bind everyone together. Out in the field, the farmers all appear to know and support each other. When all the motorcycles, buses, and auto-Rickshaws are honking at each other (which occurs constantly), it is not out of anger or aggressive intentions. During morning prayer at the CORD center, where I stay with my fellow interns Michelle and Ravi, it isn’t fifty individuals singing in isolation, but a unified whole. The fiber of existence here seems characterized by interconnectedness, by connectivity between human and human, human and animal, animal and nature.

It has really been an honor to work with CORD, an organization that wants to build upon this fundamental idea of community and facilitate the building of a sustainable farming community, uniting the poorest together in a common effort to face the challenges of poverty. That’s what is unique about CORD: Its role is only to facilitate. The goal isn’t to tell farmers what to do, and its approach isn’t “top-down,” as some would say. CORD prides itself on its truly community-based model, where empowerment is the ideal; especially the empowerment of women farmers. In Himachal Pradesh, women perform 60-80% of farming activities, and yet they remain socially and politically marginalized. The driving force behind CORD’s model of empowerment is that most of the workers are themselves women farmers, who are recruited by the organization. These women farmers go out into their communities and act as stewards for progress. They organize self-help groups, train other women farmers how to increase agricultural productivity (since farming is the main source of income) through crop intensification, and form Mahila Mandals (MM), groups which are focused on addressing the social, economic and political uplifting of women farmers. 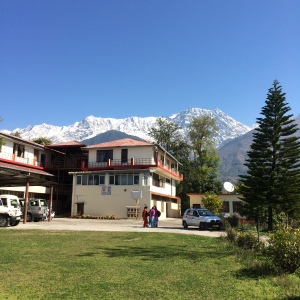 I call it the “empowerment cascade.” CORD facilitates or trains women farmers to empower other farmers in the community, who in turn support other farmers. That’s where the idea of sustainability comes in: Get the community to empower itself and unite for a common purpose. Take CORD away, and the community will still be able to flourish in the long run. It’s not a quick-fix model, but a long-run type of model, and one that I’m coming to deeply appreciate.

So where do I fit into this picture? I’m the Health and Societies guy, so (of course) I’ll be working on a Nutrition and Food Security project. Malnourishment and stunting are prevalent health concerns in India, and it’s estimated that 40-50% of children under age 5 have stunting in Himachal Pradesh. Stunting, wasting, and malnourishment are all highly linked with nutritional intake, so I’ll be interviewing farming mothers with children between 0-15 years of age what their diet looks like, and what’s left out of it. I’ll be taking heights and weights and, based on the data and some calculations, will look for patterns or trends between nutritional intake and health outcomes. Since I’ve written a novel at this point, I’ll end it at that, but more details to come next week!

Class of 2016, Majoring in Health and Societies with a concentration in Public Health. Intern at CASI CORD, summer 2015.

Getting to know Aravind