Now that I am settled in Bangalore and being oriented to the Shahi garment exporting company, I thought that it would be nice to sit down and reflect on last week’s Delhi adventures. In short is was very very hot and I am so thankful to be in the much more temperate and nearly tropical Bengalore.

I arrived pretty late last Tuesday night (technically Wednesday morning) WIDE AWAKE. After forcing myself to sleep for a few hours, Olivia (Aravind Intern I roomed with my first two nights) and I woke up promptly at 7:20 to start the day. We thought of all the things we had to do and adventures we wanted to go on and ran around trying to wake all the other interns staying at the Habitat Centre up. Not the worst idea, but not entirely successful. Time moves differently here. After a breakfast and some housekeeping errands (withdrawing cash, meeting Dr. Gosain and Ruchika at UPIASI, getting cell phones with Indian SIM cards) we finally got a group together for some sightseeing and shopping. We visited the Red Fort, which is too huge to capture in one photograph, but here’s some pictures from the perimeter and interior: 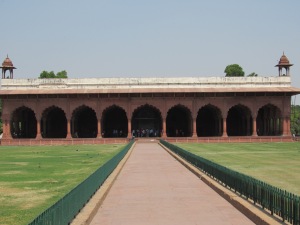 Then, we went to the Khan Market. Olivia and I went to pick up some kurtas at Fab India, an upscale Indian clothing chain while the guys (Jacob, Kevin and Vivek) found some food. Fab India had really nice clothes and the prices seemed reasonable given their U.S. conversions. A kurta there might cost 800 rupees ($13). However, later that night we would go to the Penn in Delhi function and learn from some incoming Penn students that kurtas can also be purchased for 300 rs ($5) in a local market. They gave us some tips for bargaining, saying nothing in the local market should be more than 500 rs.

The next day most of the interns I was with had to leave for their internship sites or a hostel while I welcomed the rest of the Shahi interns (Amy, Chan, and Valentine). Though much of our time in Delhi was spent overcoming jetlag, we did get a few good eating experiences out of those days. We always ate breakfast at the Habitat Centre but lunch and dinner ventures included Yeti in Khan market, which served Tibetan and Nepali cuisine. We unknowingly ate goat lung there!

Typical breakfast I ate at Delhi O’Delhi (ignore the donut)

After lunch at Yeti we walked around the area known as Haus Khas Village which overlooks a lake and is filled with ancient structures, grass, and Indian squirrels (which in my opinion are basically chipmunks).

I do not own this image, it is the result of a Google image search.

We also took it easy one night and ate at another Habitat Centre restaurant named Oriental Octopus. Everything was octopus-shaped. This was also our introduction to Indian-Oriental food which our supervisor at Shahi considers analogous to the U.S.’s Tex-Mex. Our last night in Delhi we ate at a traditional Indian restaurant called Havemore as per suggestion by our supervisor. The paneer, butter chicken, buttered naan, and buttered roti were all amazing (probably not our most healthy meal).

Our last two days in Delhi also served as the beginning of our Shahi orientation. We visited Shahi corporate offices in Delhi and got a detailed tour of the factory there. We also visited a Shahi recruiting and training site close by in Faridabad. I’ll spare the details there because Chan will be diong a more detailed post about those experienecs.

I think that’s about it for now. I’ll write again soon about Bangalore – it is quite a different city from Delhi! I will also have more detailed information about our projects at Shahi. So far we’ve been given so much information, we’re still trying to digest the state of affairs and decide what we can do.

One thought on “Delhi Days”

A Tale of Two Breakfasts

Getting to know Aravind