Since my last post, I have been traveling around Karnataka – settling for the past two weeks in Bangalore. Most of the guidebooks tell tourists to skip this “center-less” capital of Karnataka but I have been pleasantly surprised: Bangalore –minus it’s traffic- is fantastic.

On my first weekend here, I met up with artist Jasmeen Patheja to meet various members (also called Action Heroes) of the volunteer-led Blank Noise collective and discuss plans for the coming three weeks. I first contacted Jasmeen about eight months ago via email regarding the art-project-turned-social-movement, Blank Noise. Emails turned into Skype calls, which evolved into me seriously calculating how I could travel to Bangalore to meet with Jasmeen and visit the Blank Noise studio first hand. Here I am, and I cannot begin to express how neat it has been to immerse myself in what it means to be an ‘Action Hero’ committed to tackling sexual violence. 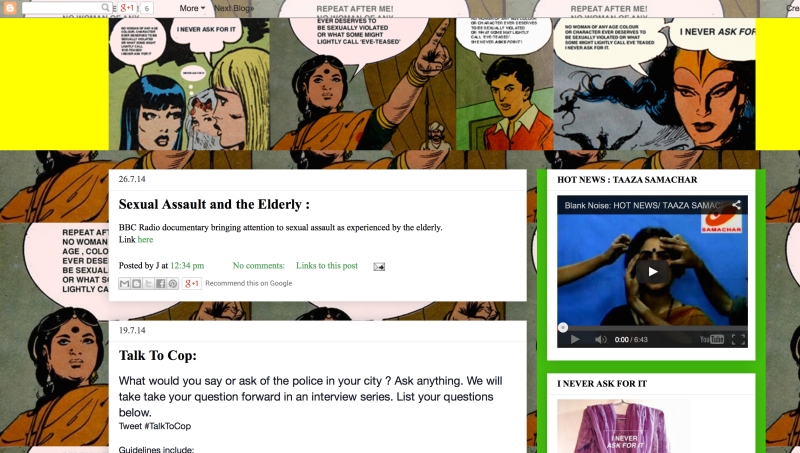 Blank Noise currently has an ‘Artist in Residence’ studio tucked away on the beautiful campus of Srishti School of Art, Design, and Technology in Yelehanka – a location that requires between a 75-to-120 minute journey each way first by auto rickshaw, then public bus, then foot (did I mention the traffic in Bangalore? Yikes).

The eleven-year old collective intervenes via events and campaigns committed to creating an attitudinal change around sexual violence. Everything Blank Noise Action Heroes make or organize is designed to encourage public participation and trigger a discussion on violence against women across many spaces: the street, web, classrooms, and institutions.

While the task sounds Sisyphean, I am optimistic that Blank Noise is inciting real and lasting change surrounding topics of sexual violence in India and now internationally. My arrival in Bangalore coincided with a whirlwind of media attention surrounding multiple rapes within the city limits – notably a young woman in a more affluent part of town and a six year old who had been raped by a school employee while at school. These accounts are horrifying, and the local media were quick to draw parallels with the widely publicized Delhi gang rape (known here as Nirbhaya) case that rocked India and the globe in 2012. Many of the people I have spoken with here have admitted that Bangalore has always been this dangerous, yet that people are starting to notice and demand a change at local and state levels.

As part of “I Never Ask For It”, Blank Noise is collecting various narratives to demonstrate sexual violence happens across multiple geographies. We are working to create downloadable charts for new Action Heroes worldwide to print and install within their communities. Another layer of this campaign will be collecting 1,000+ articles of clothing worn by individuals as they were sexually harassed or assaulted for a large street installation.

I’m eager to see which elements of Blank Noise might be successful within both the Penn community and in the greater Philadelphia area, and how, as an artist, I can initiate and support various social interventions. Bangalore and Philadelphia have different “fish to fry” so to speak, so I believe it is important to remain fully immersed in all that the Blank Noise does here so as to develop necessary tools to enable new Action Heroes back in the States.

Only in the Kumaon Region

The tradeoff between regulation and cost