“Do not walk alone.”
In the weeks leading up to my departure to India, this phrase was seared into my brain. It was certainly not the first time I’ve heard it before. As a woman, and an inhabitant of West Philadelphia past 40th street, I hear this warning often–yet I rarely believe it. Perhaps I’m lucky, or maybe a bit naive and feminist–but seldom do I actually think that walking alone will inherently put me at grave risk of being attacked or killed. I suppose I also have a higher level of trust in my own ability to sense danger and unusual behavior. And I live in a relatively safe city. I’m also stubborn and independent and sometimes I cannot walk in a straight line next to people and I need to get in touch with my inner introvert–for all these reasons, I prefer to walk alone.

Do not walk alone.
Once I arrived in India, this warning began to take on a life of its own.
I remember my first time walking through the streets of South Delhi. In broad daylight, surrounded by 3 friends and many other foreigners, I still couldn’t keep my eyes from searching for potential danger sneaking up around me. I was always nervous, fumbling, and focused on finding something scary or strange in my surroundings. I’m normally not like this, in fact, my behavior is opposite. If anything, when I travel to a foreign country I become lost in the scenery, deep in curiosity and falling in love with everything and everyone around me. If my life were the Woody Allen film, “Vicky Cristina Barcelona” (which I so often wish it was), I would be the Cristina–hedonistic, indulgent, absorbed in the little intricacies of a new culture–not the Vicky, who is always keen to say “no” and analyze the risks or downsides to an adventure.

India was different. Perhaps it was because I was traveling for the first time as an adult, perhaps because I was coming for Penn and I somehow felt more vulnerable as a “student abroad” as opposed to a tourist. The most likely explanation is the explosion of news about rapes and violence in India this past spring. I absorbed the fear and paranoia like a sponge from my parents, my friends, and the new york times. And so I had absolutely no intention of walking alone in India, ever.

Nor did I have any real intention of truly feeling like I belonged here, grasping Kumaoni or Hindi, and learning the ins and outs of a place so radically different from home. But I did–I let go, dove head-first into the challenge, and Kumaon now feels like home. It took me a little while to develop a clear understanding of where exactly I was, despite all my preliminary “research”. Politically speaking, I am in India. Regionally, culturally, economically, developmentally, spiritually, etc etc–I am in the Kumaon region of the Central Himalayas. Everything is different. The values and customs and food are all far beyond my expectations. It is more quiet, and communal–but also more wild, and isolated. The Delhi-ites who frequent our village for its few Himalaya mountaintop resorts seem just as foreign and bright-eyed as I do.

I realized in my first weeks here that being over-paranoid left me distracted, deprived of my so called “natural abilities” to perceive strangers and coming threats. More importantly, it inhibited me from being present in one of the most beautiful places on earth. Uttarakhand in Hindi is “Deva Bhumi”, which translates literally into “Land of the Gods”. 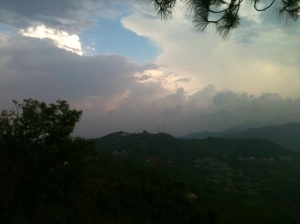 So I slowly began to trust my instincts and walk alone, and I learned quickly that the warning only pertained to walking in the blackness of nights in the hills and during the evening in the shantytowns. The former is poses the constant threat of leopards (which I think might be a myth), the latter, drunken men.
“Shantytown” is the name I use for any village which has a liquor store. These aren’t literal shantytowns, and I’m not commenting with judgement on the socioeconomic status or standard of living. To me, a shantytown sounds like some place on the edge of the earth–a place where pirates roam and hushed deals are made behind every corner. Anyways, you know you are in a “shantytown” the second you turn onto a shop-lined street. The drunks, piles of burning trash, and snack shops with flies grazing 2 day old samosas fill the air with a nauseating, sweet smokey rotting smell. But the worst thing about a shantytown, the thing that gives it the infamous sketchy-pirate vibes, is the staring men. The way men glare is overwhelming, as if they are trying to physically harass you from a distance with their dark, unmoving eyes. They just stare. They never stop or look away. The good thing is that they do not usually do anything, let alone move.  Most often, they are harmless. I have learned that its best to keep your eyes straight ahead and keep walking–blasting some empowering Beyonce songs helps too. Feeling like a local is beyond my own control, but a little confidence and not taking myself too seriously certainly helps.
In some way, these shantytowns hold a little piece of my heart. Take Bhateliya, for example, which is the local “medicinal store” hub. I’m a regular at Bhatelia. I’ve interviewed all 5 pharmacists, homeopathic doctors, and one very intoxicated “Jaundice healer”. I know where to get the best mutton momos (dumplings) and bal mitai (indian sweet). I have a soft spot for the Nepali-looking man who sells vegetables and, as always, I’ve made a few canine friends. But a shantytown is still a shantytown. And once the sun starts to fall lower in the sky, touching the landscape of hills, the men begin to grow more drunk and more loud and more dangerous and it’s time to walk alone faster, towards the comforts of home. I always seem to gauge the timing right.
Needless to say, I have yet to feel threatened by either of these potential predators–the leopards or drunken men.

The only time I came into serious danger while walking alone, I was still following the rules. It was not midnight in the jungle nor was it 10pm at the liquor store. I was making my way from my homestay in Mukteshwar to the main Chirag office Orakhand, a 10km trek down through temples and a nature trail. It was 10am on a sunny, beautiful Saturday–the least threatening, most inviting time and place for a solo hike, ever. Unlike the shantytowns or late nights, the hiking trails are always peacefully deserted and breezy, with stunning views of the foothills and terraced farms.

I was about halfway down the trail from the main road, listening to Bobby Fuller Four and the Beach Boys on my iPod when I suddenly saw an entire tree move, the branch bouncing downwards with a sickening graceful motion. It took me a few seconds to realize what was happening, and about the same time for the large male Langur to reach the the trail in front of me where he sat, staring directly into my eyes and bearing white fangs.
There are two types of monkeys in our region. There are sweet, brown ones with human-like faces and empathetic eyes–most often seen sitting happily by the side of the road or picking through mango skins and candy wrappers. I don’t even know the name of these monkeys which shows how much a part of the normal scenery they are. Then there are Gray Langurs. Langurs look like the angry, massive, ugly cousin of lemurs. They have black faces surrounded by a mane of white fur; their grey bodies are large and muscular.
Nobody warned me about the Langurs. I thought I remembered someone in the office mentioning that they had been bitten by a monkey before but otherwise, I never gave them a second thought.

In that moment, as I stood on the trail with the Langur, I have never felt more alone and threatened in my life. It felt as if time stopped–like when you first bring your head under the ocean and become enveloped in the soundless weight of water. I was paralyzed, my iPod still blasting “don’t worry baby” as I looked directly into the eyes of the Langur–how ironic.
I was shocked at how long it took for my natural human vs. wild animal instincts to kick in. I stood there awkward and limp for what seemed like ages–then I finally began to analyze the situation. I took a deep breath and remembered that in the worst case–if it bit me–I could use my scarf as a tourniquet and call my boss, a British doctor. Next I looked down, remembering from somewhere that eye contact is a trigger for aggression. I also grabbed my Swiss Army knife and began to pull out the largest blade—then I realized I really didn’t have any intention of stabbing the thing, which would have been weird and terrible–so I put it back and opted for a different defense weapon. I picked up a large rock from the ground, began walking as calmly as possibly, and stopped after a few paces to hurl the rock at the monkey, who had moved a bit to the side as I began walking, still bearing his teeth and puffing his chest. I heard a small, muffled screech and began running in my chacos down the trail.
He didn’t follow.

India continues to surprise me in so many ways–and to be honest, it is quite thrilling, much more exciting than Philadelphia. But I can also embrace these incidents as reminders of the less happy realities people face in the remote mountains of a developing country: like monkey attacks and parasites and a shoddy outlet zapping my iphone battery dead. The exotic and threatening versions of India I once had in my head are boring. I prefer the wonderfully bizarre and nonsensical India–just like my solo lunch breaks at the Indo-Chinese joint in the shantytown. I’ve always loved a good contradiction.

As for walking alone, I’ve gone about 8km since this morning. I do not plan on stopping my dangerous routine until I take the train back to Delhi in 2 weeks.

One thought on “On Walking Alone”

Located in West Philadelphia, where I attend the College of Arts and Sciences at the University of Pennsylvania. I am a junior in the 2015 graduating class, majoring in global health and minoring in creative writing. This summer I will be an intern at Central Himalayan Rural Action Group (CHIRAG) in the Kumaon Mountain region of Uttarakhand, India.