Breezing down the promenade along the beach on my rented scooter, I looked around at the old and colorful buildings in purple, yellow, and blue. There is no sand on the beach, but a bed of large black sedimentary rocks, ideal for a traveller to sit down for a quick rest while striking a pose for the perfect vacation photo in front of the water. I loved the wind in my hair, the beautiful architecture around me, and the sparse crowd of tourists and vendors scattered along the beach. We were in the French quarters of the lovely town of Pondicherry for a visit to the Pondicherry Aravind. 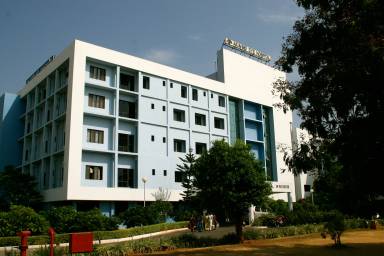 What struck me immediately was the difference between the Aravind hospitals in Madurai and Pondicherry. Despite following the McDonalds concept of reproducibility, we soon realized how different the patient population was, the physical structure of the building and even the sisters who work there. Our purpose for the trip was to speak with the CMO of the hospital, Dr. Venkatesh, about the operations standardization project that we are working on. In order to better facilitate the reporting of departmental parameters for each of the 25 distinct clinics across the 8 Aravind branches, our project seeks to standardize the process by creating a list of definitions for each department as well as a spreadsheet on Excel to maximize automation and minimize variation. The parameters are extremely specific, each coming with an average of 25 annexes that required more careful tuning. We needed to speak with the heads of each of the departments in order to settle on definitions that doctors at each of the hospital could agree on. For example, there is a parameter from the out-patient department called “0 @ 10” which requires doctors to dispose of all the patients who arrive in the morning from 7 to 9 on or before 10, so that the clinic is emptied before the bulk of the patients arrive. However, this definition could have variability between hospitals, where some doctors might interpret the patient numbers up until 15 past 10 while others might be very strict about keeping the time fixed at 10. While detailed, the individual definitions associated with the parameter sheets have very large implications for the apparent quality of care delivered by the department. After all at the end of the day, everything comes down to the numbers!

After a productive meeting in the morning, we also had the opportunity of shadowing retina surgery (specifically corevitreomy) and to put on some colorful scrubs. It was captivating to see the adroitness with which the ophthalmologists could cut, tear, and sew fine tissues in the eye!

Living by the motto, “work hard play hard,” we spent all of our downtime in Pondicherry on the road to see as many sights as possible. Our scooters allowed us the maximum freedom to travel in and around the city, visiting the Sri Aurobindo ashram, various beautiful catholic churches, the congested downtown market, and the tranquil and meditative town of Auroville. All the time, I was overwhelmed by the stark contrast I saw all around me. Pondicherry itself was unique in its preservation of French culture and architecture alongside the traditional Indian cement buildings. It was a clash of East and West and it was so bizarre to drive through the roads and observe the sudden transition from the colorful and neatly laid-out structure of French architecture to the congested Indian stores and buildings along the same road. At the same time, we also visited Auroville, that was unique its philosophy as an experimental city of meditation. Located in the Northwest portion of Pondicherry, Auroville was created after the principals of Sri Aurobindo and the Mother and welcomes people to live through introspection and equality. Interestingly enough, the picture of two are found everywhere in Aravind and is remnant in the way that operations is conducted in the hospital. 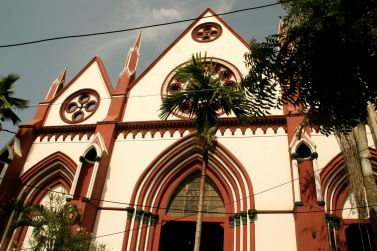 Sacred Heart Church in Pondicherry. There were many beautiful sights and churches all around the city!

Ever since arriving in India, I’ve noticed the levels of contrast that exist in all facets of life. The amount of regional variation that exists as well as the number of different religions, languages and cultures permeating this country is incredible to behold! Who knew that driving 50 km northwest of Coimbatore, a large manufacturing city bustling with people and the summer heat, could lead to Ooty, a tranquil hill station with a cool climate and green tea plantations all around? Or that the curry between Tamil Nadu and Andhra (an adjacent state) differs by the addition of coconut and some chilly spices? I love the hospitable people I’ve met throughout the journey, who have been patient enough to explain and demonstrate the phenomenal diversity that exists in this country. I can’t wait to take my journey to North India, in order to experience a different flavor of life from the South.