I began my research work on merchant-financiers in western India last week at the Professor S.C. Mishra Archives and Library Cell at the Maharaja Sayajirao University of Baroda. Originally known as the Baroda College (est. 1881), it became a university in 1949 after India’s independence. My father studied engineering at MS University in the late 1970s and my grandfather played field-hockey for the Baroda College in 1940-41. When I meet faculty members and university administrators, they are all pleased to know that I have family connections to the university and that I speak “fluent” Gujarati despite being born and brought up in the North America. Having worked in archives and libraries in other parts of the country, I must say that having some personal connections to the city, university, and the local language opens up doors more quickly. People are willing to help if they feel you “belong” in some way to their place. 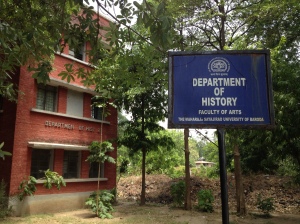 The Professor S.C. Mishra Archives and Library Cell are housed on the third floor of the MS University History Department building. My local sponsor is Professor Adhya B. Saxena, a scholar of medieval India. She has been a great support in facilitating my stay in Baroda, especially accessing institutional resources and meeting the right people to get work done. She has given me access to two rooms of uncatalogued archival materials, the book collection of eminent business historian Dwijendra Tripathi, and other resources on campus. So far, I have met faculty members from the Departments of Gujarati, History, and Sociology in addition to the Dean of the Faculty of Arts.

I have had the chance to consult materials from the Baroda Central Library at Mandvi, Hansa Mehta Library at MS University, and the Baroda Oriental Institute near the Lakshmi Vilas Palace. I also had tea with eminent sociologist A.M. Shah. Professor A.M. Shah taught sociology at Delhi University from the 1960s and moved to Baroda after retiring. He has held visiting appointments at Stanford University and the University of Chicago, and also presented a paper at the University of Pennsylvania in the 1980s. He was surprised that I could cite his scholarship in our conversations about Gujarat, and for this I have to acknowledge Professor Ramya Sreenivasan at Penn who introduced me to his writings. Professor A.M. Shah pointed me to resources at the Gujarat State Archives in Baroda and also put me in touch with scholars in Ahmedabad. He also gave me valuable feedback on my research subject.

I have been staying at the University of Baroda guest house and make periodic visits to extended family in the city. I will be sharing some materials from my archival work in a subsequent post.

I am a doctoral student in the Departments of South Asia Studies and History at the University of Pennsylvania in Philadelphia. With the support of CASI and the Department of South Asia Studies, I am in India pursuing 10 weeks of pre-dissertation fieldwork at the MS University archives in Baroda and the National Archives in New Delhi. En route to India, I stopped over at the British Library in London to survey the India Office Records. My dissertation topic studies statecraft and governance in eighteenth and nineteenth-century western India with a focus on the political relationships and cultural practices of credit networks. In particular, I am investigating how a band of military mercenaries turned to principles of finance to build institutions and consolidate public authority.

My intro to education in India