I knew almost nothing when I stepped off the plane in India.  I had perused Leap’s website and read through the handout that CASI provided about my internship, yet I still did not really understand Leap’s mission.  Four weeks later and I think I’m starting to get a grasp of it.  When a liberal American interested in the education field hears the words “for profit”, a warning light goes off and starts beeping loudly as if to say “DON’T GO ANYWHERE NEAR THAT! Nothing good can come from it.”  Naturally, when I found out that Leap was a for-profit education organization, my initial reaction was uncomfortable.  How was I supposed to get myself behind something that compromises some of my deepest beliefs?  I may be an idealist, but I have always thought that education should be free for everyone and maybe I earnestly believed that I could make it so.  What then was I supposed to do with myself seeing as I was stuck here in India and was working with this organization that I clearly had not researched thoroughly enough before coming?  Could it really be that bad if CASI was willing to put it’s name behind it?  Didn’t the CEO of the company seem genuine enough in her belief in education quality?  We met the students and then my mind was set.  Yes, these students are fairly well-off and can afford the tuition that Leap charges its students, but I could still see that they lacked something in their education that I was privileged enough to have.  They still struggled with similar questions about their career and life choices that I had struggled with not too long ago.  Yes, there are students who receive far less than these students in India, but that doesn’t mean that these students don’t deserve better either.

Education in India is a tricky topic as I am beginning to learn.  Almost everyone except the very, very poor pays for their education, though the amount they pay is quite nominal compared to what we pay in the United States for private education.  Public schools in India are so bad that even the teachers don’t show up to class in many cases.  Thus, private schools are not reserved for the very wealthy and a select few on scholarships as they are in the U.S., but rather are relied upon by the middle class to provide their children with an opportunity to make it into India’s top universities.  Unfortunately, this appears to create an even larger gap between the extremely poor and the rest of the country as they are forced to use government schools and receive a much different level of education than their peers in private or government-assisted private schools.  I can’t help but think that if public education continues to be vastly underfunded in the U.S. that a similar pattern would emerge.  All but the very poor would give up on public education entirely and go for alternatives, while the extremely poor are forced into a failing system.  As more students leave the public education system those left behind become more marginalized and less able to advocate for their own education.  Though it seems to me as though investing in public and not private education is vital to establishing any sort of equal playing field for the poor, I also am a part of the private education system in the U.S. as a Penn student and I cannot deny that it has its benefits.  In the long term, there cannot be education equality without a free quality educational provider, but in the short term there are many realities at play.  When there is no quick fix in sight for India’s education system, then is it not smart to offer services to supplement the poor quality of education that many of these middle class students are receiving?  This is the justification I use for what we are doing at Leap.  I am an idealist, and I have to ground myself in reality by considering that though the ultimate goal may be for quality public education, first there has to be quality education, period.  This brings me to what I have observed so far in my time interning for Leap concerning the quality of education in India.

If I thought that the state of standardized testing in the U.S. was an issue, then it is nothing compared to what it is in India.  Students learn for the most part by rote memorization and forget knowledge soon after the test.  Creativity is not valued highly within the classroom and traditional methods of teaching (i.e. simply lecturing) are the norm.  Skills such as professionalism, teamwork, and leadership are not emphasized within the curriculum and this places students of this system at a disadvantage in the workplace.  If graduates of the Indian system are to be competitive in the global workplace, they must develop these essential skills at some point in their lifetime.  Not only are these skills necessary for these students to lead productive work lives, but it is also essential to their development as human beings.  We need certain skills, such as emotional intelligence, to be developed in young adults so that they can become productive members of society.  Most of what I have learned about India’s educational system, I have learned by asking the students themselves.  This gives me the idea that they have high expectations for what their education should be and that they are continuing to seek better opportunities for learning.

One aspect of the students that we have worked with at Leap thus far that I have really enjoyed is the genuine desire to learn.  Every time I step into the classroom, I doubt what I am doing less.  We are nearing the end of a 4-week program with a group of high school students from Yamuna Nagar and I am going to miss the grounding experience of actually teaching in a classroom.  The remainder of our internship will much more heavily focus on preparing for Leap’s expansion to four more schools.  My dream would be that Leap could one day expand to the purely public schools of India, but for now we will have to just work on perfecting the program we have. 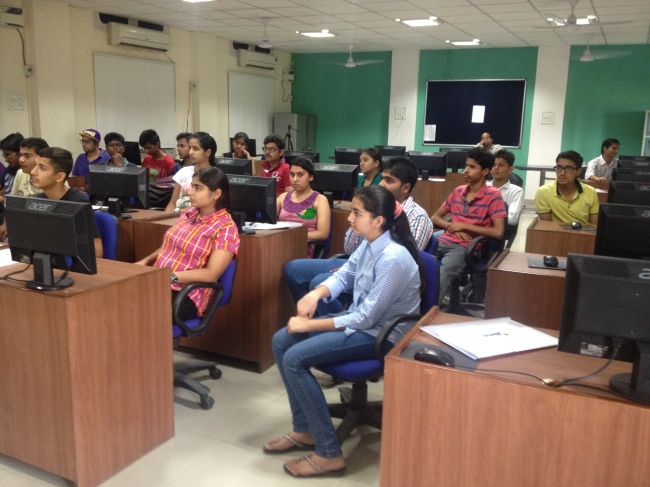 4 thoughts on “My intro to education in India”

University of Pennsylvania Class of 2015, majored in Biology. Works at Leap Skills Academy in Delhi, India.