I just had the most amazing weekend getaway, filled with beautiful weather, incredible natural scenery, and some of the most memorable friendships. Early on Saturday afternoon, Abhi, Zach, Erica and I travelled with a personal driver to the beautiful hilltop station known as Kodaikanal. Fair warning: I had way too much fun taking photos so the rest of the trip will be explained largely through photographs.

The trip up the mountain was beautiful – all around us were lofty green hills and beautiful weather, that grew cooler and cooler the higher we climbed. This was a welcome change to the stifling heat I was used to in Madurai. The total trip took around 4 hours, with 2 pitstops in the middle. One of my favourite part of the trip was all the monkeys we saw on route. The way they freely jumped around our car and watched us from a vantage point reminded me of my trips to African Lion Safari as a child. I was thrilled when we made our first stop to have the opportunity for an intensive photo-op with the monkeys. They were adorable but surely very menacing as well! I was lucky enough to observe an intimate moment between a baby monkey and its mother, reminding me of the similarity between monkeys and human beings and specifically the shared ability for love.

I also made some new friends with the local women! It seems that most Indians love to be featured in photographs so much so that I have officially been designated a photographer by many of the locals that I’ve met since arriving in India.

That day was also the first time since my food poisoning that I felt adventurous enough to venture out of my comfort zone and try street food. I hated living in fear of what I ate. Besides, the last bought of sickness was enough to increase my resistance to further sickness right? I decided to purchase a cup of masala chai, which turned out to be extremely scrumptious and aromatic because of the ginger pieces added, and 2 fried bell peppers that was fried, greasy, and heavenly. I also bought 250 grams of the homemade chocolates that I had heard Kodaikanal is famous for. By the time we left the rest stop, I had finished almost all of the food that I had purchased! It was so much fun to finally release my inhibitions towards the lack of sanitation and to unleash my adventurous side. The new challenge is to avoid getting fat

After arriving in Kodaikanal, we quickly made our way to the youth hostel, called Greenlands, hidden by a sharp turn right on the edge of a hill. We were thrilled to discover that our rooms opened with a view looking right over the valleys! It was spectacular and majestic and even the boys became open to the prospect of waking up early the next morning to watch the sunrise over the hills. Luckily, Erica had a compass app for us to figure out which direction East is. After settling in our rooms, our driver took us to a Tibetan restaurant! It was a spectacular evening, filled with wonderful food, joyous company, and some more adventure in the town of Kodai. We walked back that evening extremely tired and thinking that we would head to bed early in preparation for the sunrise the next day. Little did we know what was in store for us later that evening…

Of course I make it sound a lot more ominous that it actually was. Arriving back at the hostel, we walked around outside and began to converse briefly with an Indian guy staying right beside our room. Soon, the number multiplied and Abhi, Zach, and I were introduced to the rest of his friends and classmates. It turned out that the people living next doors were students from an Indo-German commerce school in Bangalore. It is typical for Indian college students to venture out on weekends to nearby cities and to have spontaneous travelling adventures. To my surprise, it was actually a chilly night and I shivered continuously in my t-shirt. After having been in the Madruai head for the past 2 weeks, I was not accustomed to the 15 degree celcius weather that is typically in the hills of Kodaikanal. It was so much like Toronto that I started feeling nostalgic! The night carried on with conversations and jokes and continuous socialization. I met an Indian boy from the northern state of Uttarakhand, who was super eager to share with me all the beauties of India and had a knack for imitations. I met a german couple who are classmates with the other students and who had the most epic travel plan after their studies; around the world in 365 days, with an end journey in North America. I met another boy who was known as the lovable guy in the pack – he was the Santa Claus and the Teddy Bear, and fulfilled whatever position the others needed him to fulfill. I had grown so used to the slow lifestyle and early curfew in Madurai that I really enjoyed the change in lifestyle by hanging out with the local college students. I learned so much about the Indian college scene and discovered the ease with which we were able to connect with the local students. Seeing the group of student on their spontaneous and wild adventure, I couldn’t help but look forward to the rest of our weekend trips for the rest of the summer. It further sparked my desire for an exciting escapade! 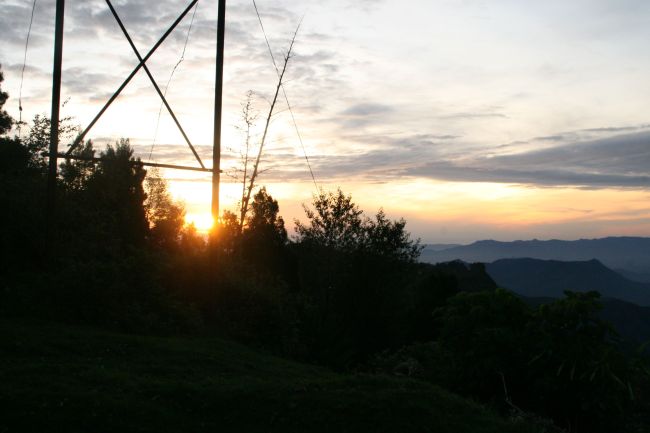 The following morning, I woke up at 5am (I was feeling super grumpy with only 3 hours of sleep from the night before), tired but prepared for the spectacular sunrise in stored for us. The morning air was chilly but I had a blast waiting for the sun to rise, occupying my time with a round of photography of the beautiful scenery all around us. I couldn’t get over how breathtaking the sights were, with every shot worthy of its own caption. As I looked out from my high position on the mountain, I felt as if I were literally walking amongst clouds. 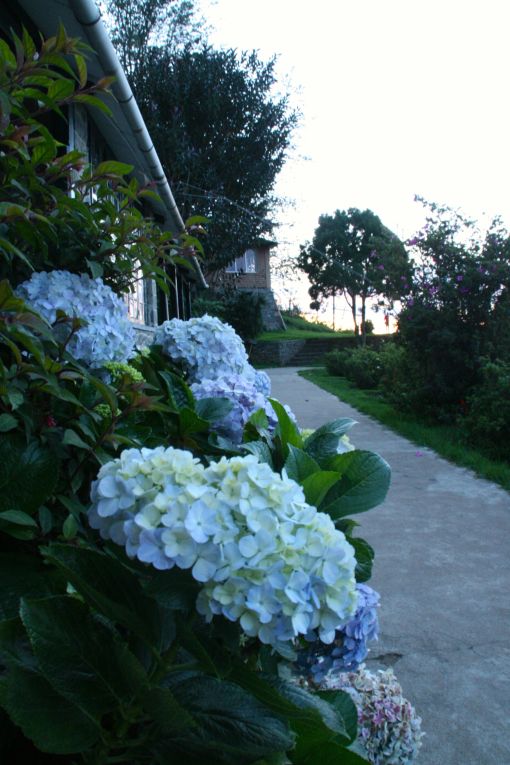 Even the view from right outside our doors was incredible! 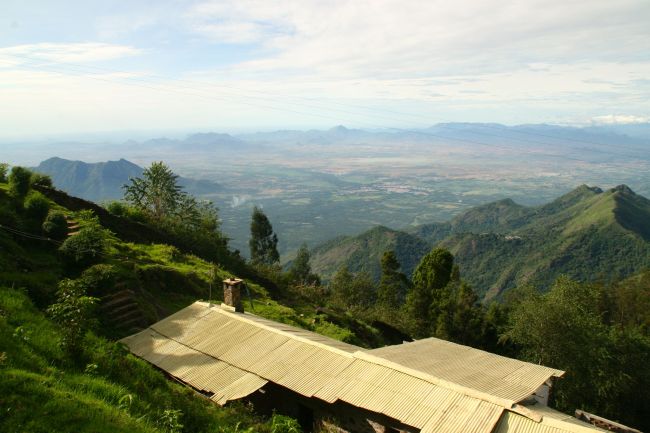 At 9am, we prepared for the nature walk that we had signed up for the night before. We were introduced to our guide, a young boy who had a great sense of humor and an impressive amount of sagacity on wildlife and plants. He led us through an unpaved terrain, where I received countless scratched from the thorny bushes. Luckily, Kodaikanal did not have many mosquitoes, saving me from having to suffer from both pain and itchiness at the same time. Our walk took us through dense shrubbery, along the mountain ledges high above the valleys below, and under fallen tree trunks and hanging vines. The last portion of our journey brought us through a patch of poison ivy, an experience that made me feel like I was dodging laser beams at my feet. The guide was also an amazing photographer, giving each of us the opportunity for an amazing photo-op at the edge of the cliff. I was exhausted and sore everywhere but enjoyed the natural scenery and air with every fibre of my body.

On our way back to the hostel, we walked along the road, passing by a church, reminding me of my mission to find a church back in Madurai. It was a beautiful blue and white chapel, with a grand staircase leading up to its entrance. Outside, a statue of Jesus on the cross is displayed for all passerbys to see. I was very curious about the prevalence of Christianity in the city, as it is close to Kerala, the neighbouring state that is predominantly Christian. Unfortunately, we did not have time to visit the church before heading back. 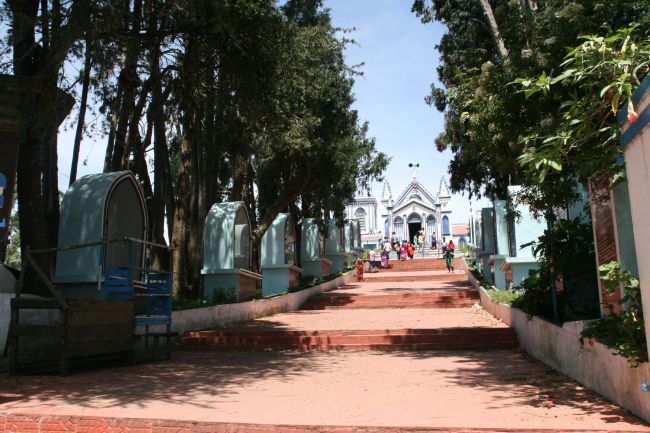 There wasn’t much more to do in Kodai after that point. We visited the man-made lake and the park that were supposedly popular tourist locations in the area, but neither of those places had the same appeal as the natural scenery that came free with the location of the hostel or the wonderful company we had the night before. I bought some more chocolates and some gummies for the trip back and we left the beautiful town with the mesmerizing appeal and perfect weather.

Of course, a trip is ever complete without me befriending some local children. On the way back home, I politely asked the driver to stop by the side of the road, where I noticed a small village located on top of the hill. I had such a great time interacting with the kids! I was flattered to find out how much little kids liked to talk to me.

He is a four year old boy who was playing with a tire in the nearby cemetery with his friend. He was super shy when I first saw him, hiding behind the building when I asked him for a photo. It didn’t take long for him to come out of his shell and to begin photo-bombing my photos with his face right up against my camera. I couldn’t get over how adorable he was!

This is a family I met on my trip up the steps. They are not used to many visitors and the adults viewed my photos as an invasion of their privacy, asking me instead to just photograph the children.

On the way back, I became contemplative as my music blasted through my iPod in my ears. The whole experience made me think about what matters most in one’s life. So many of my best memories from the trip came unexpectedly and cost nothing. I love having immersive experiences to truly understand the people and customs of a culture, including interactions with nature, conversations with locals, and spontaneous decisions to live on the edge and make new friends. Sometimes the best memories truly come from rash decisions late at night. All it takes is some good company, the starry sky, and the ever-present clouds floating calmly around you.