It took me a while to realize where the music was coming from. From April to July, the hills are alive with the sound of communion; it rings out and echoes among the valleys, bouncing from peak to peak to reach the ear drums of all the surrounding villages. Weddings here typically last about three days. They involve separate ceremonies for giving away the bride to the bridegroom and his family, tying the knot with a priest, and a huge party full of Indian sweets and Bollywood-esque tunes. I have always wanted to go to an Indian wedding, ever since I saw Bend it Like Beckham as a little girl. You can imagine my excitement when we were invited to our first one this coming friday, June 6–thank goodness I bought a more formal Panjabi in Delhi!

One of the local village health committee members excitedly introduced us to the bride (his niece), after we were invited to sit in on a health meeting in his home. This was one of the highlights of my first day on the ground with Prema, an incredibly nice and charismatic local woman who heads one of the village health committees. After a health lecture at the elementary school, and we trekked rocky Himalayan paths ridden with cows and dogs to 3 different homes of community health workers to speak about local issues. Eileen and I were lucky enough to have Aardra there to translate conversation–which was extensive and highly informational. I learned about the hoards of problems with women’s menstruation infections, iron deficiencies, and pneumonia during monsoon season–these are only a few of the illnesses that plague the people here. Our day concluded with an afternoon tea of young peaches dusted with chili salt and a relaxing stop at the local mountain temple. This day in Kumaon hills made me better understand the sense of community here–there is so much interconnectedness and caring for one another. Between the sense of generosity and eagerness to teach us from the health committee and Prema’s dedication to our day of learning about local health issues, I felt as if I was a part of a larger family. There is a sense of equality here–an inclusiveness, perhaps for necessity: for survival in the mountains. 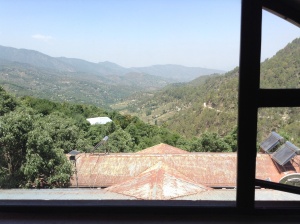 Nainital had a similar feeling, but more commercialized–it was almost as if the bright mountain culture was displaced to a quaint lake town. This was our first stop on our five-day very long weekend trip. The energy in Nainital was wonderful. It was our first time back in any sort of metropolis after two weeks living in the peace of Simayal village. Upon stepping off the 2-hour bus we were immediately greeted by the smell of North Indian street food and the bustle of vendors selling luscious silk and linen fabrics. The afternoon was spent touring the Tibetan market and eating mutton momos (dumplings) at a famous Indo-Chinese joint, and snacking on ripe apricots with weird street cappuccinos by the lake. Moments like these were often interrupted by requests for Mary and I to pose for pictures with families, many of which had never seen a six foot tall blonde girl in real life. However, all in all it was a very warm and happy place. This feeling quickly deteriorated as we boarded a 12 hour non-AC night bus to Haridwar, which was quite possibly the worst decision of my young life.

We arrived in Haridwar at 4am covered in bus grime with tangled hair and bleary eyes–each of us with different stories of frustration and discomfort, mostly from the unfortunately inappropriate men sitting around us. The holy city of Haridwar is a popular pilgrimage site for its temple on the “Ganga snan”, a bath in the Ganges. We partook in this daily purification ritual, in which we dunk ourselves three times (fully clothed, because we are women) into the cool water.The stretch of Ganges here has a fast current, with clear and cool water running straight from the Himalayas. When we got out of the water and walked around, the staring became overwhelming. This is something I am still not used to, because I have only been in Delhi (many non-Indians around) and Simayal (the whole community knows us as Chirag interns). I am pretty sure that we were the only foreigners, Mary and I the only white people, and I the only blonde person in the entire city of Haridwar. The cell phone pictures, pointing, and open-mouth stares surrounded us like the cloud of grit and hazy smoke that settled in the city. As I mentioned earlier, people often ask to take pictures with me. I am fine with this because I usually get to meet a very nice family and engage in some pleasant conversation. However, many times people (men, usually) just take pictures of me with their phones, as if I do not notice them. It happens every single minute and becomes a bit too much to ignore. This in addition to the staring made me feel very stressed, so I wore a scarf over my head for the rest of my time in Haridwar to detract attention. I was more than ready to get to our final destination, Rishikesh.

I had no expectations for Rishikesh, other than a more peaceful experience because we were staying in a hilltop “Swiss Cottage” near a yoga ashram, which is a spiritual mecca or sorts for foreigners. Rishikesh is also a holy city, but known more for its yogi festivals, riverside temples, and tourist spots catering to outsiders. It was very “Eat, Pray, Love”–many foreigners in hippie outfits, with dreadlocks, man-buns, and prayer beads. Needless to say, I kind of fit in. So we experienced a new kind of culture shock–or, reverse culture shock– in Rishikesh. Immediately we felt the stares subsiding and english-speakers increasing. Over breakfast that morning, Mary and I overheard a few tattooed/pierced European girls talk about doing yoga while living off their parent’s inheritance, and compulsively stealing from expensive stores. Following this, I witnessed a bald white man do some bizarre spiritual drinking/bathing act in the Ganges, and light a bowl of flowers to float down the river (a Hindu religious ritual) only to pull out his smart-phone and take pictures of the whole ordeal.
I try not to judge, but I couldn’t help but feel bothered by this juxtaposition between the local Sadus (kind of like Hindu monks) who flood the streets of Rishikesh begging for food, and these wealthy tourists with Om tattoos eating pizza while glued to their screens on facebook. They dressed like the sadus, meditated and did yoga like the Sadus, but seemed as if they were searching for faith in a more superficial, self-serving way. The Sadus were selfless, that is the whole point of their life. The sense of inequality and lack of a homogenous community who takes care of one another made me long for Chirag. However, it also gave me a clearer picture of India, and perhaps what it means for many Indians when people like me try to live here and immerse in the culture. I think a good deal of people with money come to certain parts of India for the wrong reasons; too often it’s for spiritual enlightenment to quell a midlife crisis or quarter-life boredom. I began re-examining my own motives for coming to India, which made me thankful that I have a grounding organization like CASI, academic pressure from Penn, and a strong sense dedication to the local community from Chirag.

I think I am beginning to love India, in a very complicated and realistic way.

And finally, to end I will talk briefly about Indian stomach problems, because between the four of us it might be the biggest theme of our internship to date. I kind of blame myself, because after 3 weeks here I eat street food as if I have the globe-trotting stomach of Anthony Bourdain and one time on the bus I drank a cup of this wonderful rose tea given to me with a blessing from some random Sikh guy from a local temple (sorry, mom). Nevertheless, all of us are okay and have found that we are bonding through our bouts of illness and especially one other thing: O.R.S
In my three years of studying global health, I have studied, written about, and analyzed the World Health Organization’s oral rehydration formula countless times. And here I am, resting on my cot in the girl’s dormitory at Chirag with my liter of water mixed with a standard packet of WHO oral rehydration salts. I am trying to force it down–one liter per hour for two hours, they told me. The solution tastes like you dipped a cup into the ocean and threw in a tablespoon of sugar with crushed up vitamins. It’s gross. All I have to say is no wonder why it’s so hard to get people to drink this for treatment, especially kids, in countries where water-borne diarrheal diseases are rampant. The last thing I want to do when my stomach is upset is chug a bottle of ocean. It’s worse than Beyonce’s cayenne-lemon detox.

Alas, no matter who it is–a child with cholera being fed the solution in a Mumbai slum or me, an American intern whining in the comforts of her mountain NGO home–we are all feeling the same feelings and drinking the same lukewarm salt water.

Located in West Philadelphia, where I attend the College of Arts and Sciences at the University of Pennsylvania. I am a junior in the 2015 graduating class, majoring in global health and minoring in creative writing. This summer I will be an intern at Central Himalayan Rural Action Group (CHIRAG) in the Kumaon Mountain region of Uttarakhand, India.

A lesson in saying "NO"