I can’t believe that I’ve been in India for almost 2 weeks now! It’s been a whirlwind of events since arriving, but I have finally began to adjust to the intricacies of Indian lifestyle. The past 3 days have been some of our most productive since arriving here at Aravind. Work wise, most of our time has been consumed by a research project in the glaucoma department, a group of conditions to the optic nerve caused by a build-up of pressure in the eye and that results in the insidious loss of vision. Our project involved researching into the efficacy and feasibility of shared medical appointments, a new method of patient-doctor interaction whereby a single doctor can cater to many patients at the same time. In order to tackle this problem, we have shadowed physicians and counsellors, spoken to various individuals in the glaucoma department to get a sense for the patient flow, researched into the categorization of glaucoma, and traced through departmental and patient records. I have learned more than I have thought possible in the span of 3 days about hospital operation and flow as well as really get a sense for opthalmology as a field. Stepping into the clinic, the first impression I always get is the burst of cold air from the AC in the waiting room. Next came the stares from the waiting patients, comprised mostly of elderly men and women, usually accompanied by their children. I cannot get over the genuineness and hospitality of the people in Madurai. On our first day, Zach and I were approached by a family of young girls and their mother, who spoke very little English but were extremely eager to speak to the two of us. They even left me with a beautifully hand-crafted bracelet and Zach with an elegant ring! The flow of the department is intricate but here’s a quick overview: on a typical visit, a patient would go through vision checkup followed by OCT, before heading over to review examination with a physicians. Depending on their conditions, patients are either asked to undergo additional investigations, referred to surgery or another department, or sent home with a simple drug prescription. Watching the MLOPs (equivalent to nurses) rush through the hospital floors with their pink patient case folders, while keeping track of every incoming patient was like watching an exciting soccer match. From a bystander’s perspective, their flow was so smooth and effortless yet purposeful and efficient. It amazes me how a single nurse is able to recall details about all 300 or so patients that filter through the clinic in a single day. Even more impressive was the actual patient and doctor consultation. Some of these sessions were so efficient and short that the patients would essentially filter into the office like water droplets into a glass container, one after another without space for a break. Aravind’s incredible patient volume has rendered the check-up into a mechanistic reaction, an act done with as much muscle reflex from sheer experience as application of new knowledge. It was an intriguing sight to behold.

I shadowed Dr. Manju Pillai, a large middle-aged woman with a lethargic voice and and a strong demeanour. Her eyes exuded intelligence and experience that initially intimidated me. Having observed her go through 30 or so patients in one morning, I was surprised by her mental ability to multi-task and answer to a chorus of nurses, patients, medical personnels. Most of the patient doctor interactions are done in Tamil, leaving me to guess at the occasional English word and body language. After each patient, I would ask Dr. Pillai to summarize the diagnosis as well as her recommendation for next steps to record in my little sticky pad. An interesting thing that struck me was her examination of an elderly poorly educated village man, who was diagnosed with both glaucoma and cataracts in one eye. The man had come in prepared for glaucoma surgery, and eagerly asked the doctor to give him the heads-up. After a long exchange (with an interpreter in the middle to translate into Hindi), she gave the man the option of accepting surgery today or in 6 months. The interpreter replied, “He came ready for surgery today but can also come back in 6 months. It’s all up to you.” There was a moment of loaded silence before she recommended the latter option. Later, she presented her rationale to me, explaining that the vision in his problematic eye was already 80% gone because of the glaucoma with an additional 5% lost by the presence of cataracts. If she were to recommend cataract surgery in the present, there is a large chance that the patient would not notice nor be appreciative of the 5% vision reclaimed from cataracts. Instead, she asked him to wait for the cataracts to exacerbate so that the benefits of surgery would be more prominent. This was all under the premise that vision loss as a result of cataracts is fully recoverable. I was very intrigued by this interaction because it showed me a side of medicine that I hadn’t really thought of in the past. I had always naively assumed the patient-doctor interaction to be a simple conversation where the doctor’s sole goal is to diagnose and cure as quickly as possible. However, this event demonstrated to me the nuances involved; there was an element of psychology, a mixture of empathy and having the correct comportment. I was very impressed by her composure when put on the spot to make an important and immediate decision. Under the scrutiny of 5 pairs of eyes (mine included), she calmly handled the case, appeased the desires of the patient, and justified her choices to me. This week has been an incredible learning opportunity for me; I finally know what opthalmology really is, how a patient flows from beginning to end on a visit, the number of people required to make the system work, and the role of the doctor as the linchpin in the system. 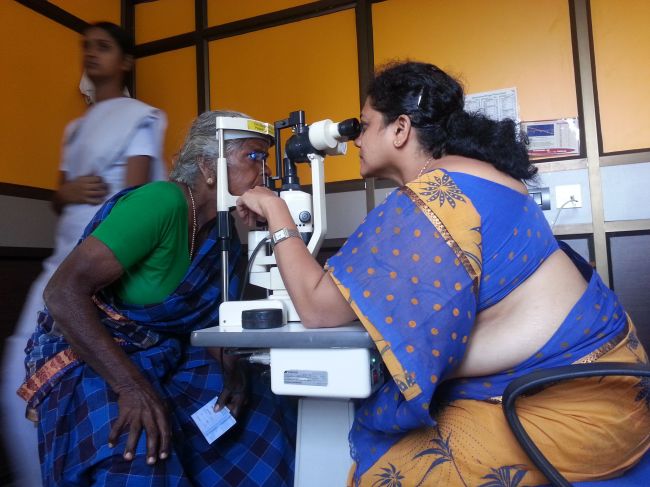 Dr. Pillai using a fundus eye slit camera to examine the pupils of a glaucoma patient. I have observed her do this experiment half a hundred times and I am still intrigued by the process. Sometimes, it only takes her the span of 30 seconds to make a judgement call.