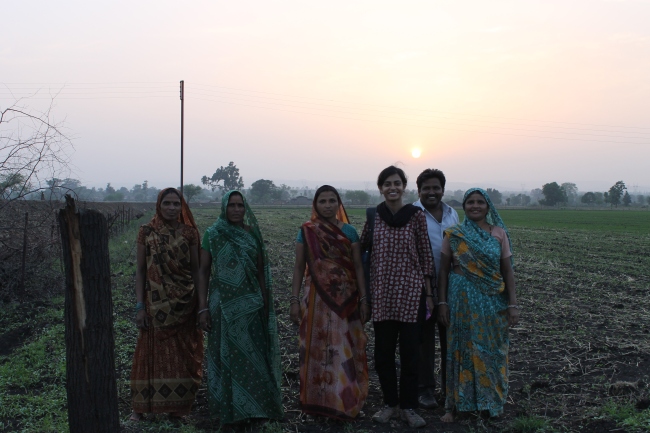 A lack of largermarkets and social and geographic isolation has led marginal farmers in the dryland regions of rural India to rely on village traders and to sell their marketable surplus. The arbitrariness of such localized relationships has in many cases kept farmers poor, as these petty traders often entrap farmers in a vicious debt circle and offer exploitatively low prices.

To address these adversities, commodity aggregation and large-scale marketing of the aggregation has been seen as an alternative method to the status quo. The NGO Samaj Pragati Sahayog (SPS) thus began a Commodity Aggregation Program under the Ram Rahim Pragati Producer Company (RRPPCL) to align members of Self Help Groups (SHGs) with organized markets for the sale of farmers’ harvests. RRPPCL collects these commodities from farmers, stores the produce in warehouses, and transports and sells the aggregation to organized markets when prices turn favorable. RRPPCL is owned by SHGs of women who are also primary producers. These shareholding SHG farmers exclusively qualify to sell their produce to the Company. Further, they stand to receive bonuses if the Company makes a surplus after selling the aggregation to larger markets. The unique advantages of commodity aggregation are manifold. However, to distill it for this post, I will say that RRPPCL and other Producer Companies across the nation give farmers the right to participate in a potentially profitable enterprise and make a surplus they can sustain their families on, instead of being vulnerable to the practices of village traders. In addition, RRPPCL importantly focuses on developing women’s rights to control and management over their own livelihoods.

Preliminary data I found indicated that out of the fifteen hundred primary producers who are members of the 121 shareholding SHGs, only around four hundred producers actually sell their harvest to the Company. In other words, the data showed that only 26.67% of Company members who can contribute do. The small base of contributing members threatens the success of the Company, because the larger aggregation the Company receives, the more economical transportation and warehouse costs become, the larger buying markets tapped, and the higher the net profits. The perplexity behind low shareholder involvement must be discovered. Thus, the central research question asks why do most farmers of shareholding SHGs not contribute to RRPPCL? In this regard, what are both the logistical and systemic dilemmas the Company will face moving forward? Finally, in order to increase the bulk of commodities the Company receives, this study attempts to address how it can cater to the concerns of small and marginal farmers.

This study was conducted across the Bagli, Kantaphod, and Udainagar regions of the Dewas district in Madhya Pradesh. 192 women farmers from nineteen villages and twenty-one Self-Help Groups (SHGs) were surveyed throughout June and July of 2013. The data of each woman interviewed was gathered for kharif season (monsoon) 2012 and ravi season (winter) 2013, the most recent seasons.

The sampling method was a bit complicated, but I will try to simplify it for the purpose of this post. SHGs with RRPPCL shareholders were targeted in each of the three regions. SHGs were selected across diverse geographic regions and with a diverse array of ratios of number of members contributing to the Company to total number of primary producers. What this means is that SHGs with a lot, a medium level, a little, and zero contributing farmers were all interviewed.

After the SHGs were chosen, a survey was created in Hindi. Certain questions, such as landholding size, crops grown, quantities sold, prices received, institutions sold to, etc., were asked on an individual basis in a round robin format. After each individual farmer’s responses were recorded, the second half of the survey was conducted as a group. The group was asked why certain members do not sell to the Company, what are the advantages and disadvantages of selling to the Company, what is the maximum period you can wait for payment delivery, etc. The rationale behind asking certain open-ended questions in front of the group was that women of a single SHG had very similar agricultural experiences. Furthermore, because the SHG is a shareholder as a whole, the Producer Company’s success or failure impacts each and every member of the SHG, entitling even the non-farmers to a right of discussion.

This study found that RRPPCL should delve into analyzing five primary areas of concern in order to increase shareholder participation: Timeliness of its weighing and collection activities, dependency of marginal farmers on village traders for agricultural inputs, late payment deliveries, low quoted prices and strict quality controls, and distribution of a bonus or not. I have written a lot on each of the areas in a separate report, but I will give you a short synopsis of each topic.

I had a wonderful time conducting research for my report. My topic area interesting dovetailed a study of business with traveling village to village to gather data and have conversations with the women who I think have sometimes been forgotten in the grander operations of the Company. The joy of briefly connecting with over two hundred women by exchanging stories, listening to grievances, sharing laughs, being blown away by their deep insights, and promising each of them that I’d do my small part to try to document their daily struggles was one of the most enriching experiences of my life. I actually had fun writing the report and tabulating data to draw these wider conclusions. I know—nerd alert, but it was awesome to see how my Huntsman degree from Penn could be put to use in a way I find mentally stimulating and soulfully purposeful.

I think interning in rural Madhya Pradesh as an Indian-American can seem like a cop-out to some. Come on, land somewhere exotic where you can truly feel like an outsider! But I feel that my mediocre knowledge of Hindi, preexisting context of rural India, brown face, and fundamentally deep love for this beautiful country allowed me to bond with the women I met and the project I researched at a level a true outsider would take time to develop.  All I know is I am going to keep coming back to communities like the ones I spent ten weeks getting a glimpse of, because that is where I feel I belong.

If any of you are interested in reading more about my study, I have written a much more detailed, longer report for SPS that I’d be happy to share with anyone. I cannot thank SPS, the women I interviewed, and CASI enough for this summer. Thank you all!

From the Himalayas to University City