India’s government has made a habit of letting its own people down.  With an election looming on the horizon, meaningful reform has given way to pandering populism.  Rather than taking steps towards an economic environment in which people can afford food, the government has decided it would be best to hand out food to the neediest at enormous public cost.  The ‘food security bill,’ as it is referred to in the media, will actually function to make the country less food secure by enforcing a culture of dependency without an investment towards an improved future.
India’s economy is driven by services, primarily in urban areas, where development is most apparent.  Indeed, while nearly 70% of Indians live in rural areas, agriculture only contributed 16% to the nation’s GDP in 2011.  This gap between population and productivity makes clear the fact that India’s farms are extremely under-productive.  From my perspective, there are several ways to address this problem.
My research showed that the most productive farms were those that received investments from an external entity.  That is, those farms that had financial inputs from outside of the farm itself.  The most productive dairy cows I saw were exotic cross-bred cattle living on vertically integrated concentrated animal feeding operations, or ‘factory farms.’  This is unsurprising, as these cows were fed a precise diet from birth, and were generally sold after only a few lactation cycles (ensuring that only the most productive cows are on the farm).  Small-holder farmers are not able to provide appropriate rations to their animals, resulting in diminished productivity.  While dairy cooperatives ensure that small farmers can still make a small profit, with no direct access to markets (not to mention meager land and labor availability) these farmers have little incentive to increase productivity.  Thus, as urban demand for dairy increases, the larger farms will factor more heavily into India’s agricultural equation.
To ensure that urban demand for dairy is met, the government must take action.  Building state-of-the-art dairy facilities is expensive.  Therefore, government should seek to open agriculture to greater foreign direct investment, in order to avail capital to corporations looking to build a more productive farm.  As large farms would then flourish, government ought to simultaneously address the millions of dairy farmers whose livelihoods would be put at risk.
To increase productivity in small farms, contract farming is an important option to consider.  In this scenario, a company (or larger farm) provides seed, fertilizer, training, veterinary care, and other services to a small-holder farmer in return for a share of output.  Contract farming is in use in dairy farms in Rajasthan, but outdated laws have prevented it from becoming available nationwide.
Beyond this, there are numerous ways for the government to improve the productivity of its small farms.  Increasing access to credit for farmers, investing in education, improving infrastructure (especially dilapidated roads and shoddy electrical grid), removing counter-productive subsidies, and authorizing genetically modified crops could all go a long way to improve productivity and food security.
If the government does further liberalize agriculture, the future for small-holder farmers is bleak.  Cabinet ministers are actually quite blunt about this: Prime Minster Manmohan Singh declares that “salvation lies in moving people out of agriculture.”  If Singh has his way, though, he will have millions of unemployed people on his hands.  One potential avenue for putting rural Indians to work is in manufacturing: but for that to happen, government would have to reform labor laws in addition to revamping infrastructure.
No matter the route taken, care should be taken to ensure that women and those who have been traditionally discriminated against based on caste are not left behind.  Many rural Indians I met fell into the latter group, and though they had little wealth or education to their name, they were almost invariably cheery and forthright, hopeful for a brighter future.  Arbitrary social barriers that prevent upward mobility are cruel and unjust.  India ought to incentivize education and job training for all citizens, but especially members of historically disadvantaged groups in rural areas.  In the slow march of development, all of India’s people must walk in stride.

I’d like to conclude this blog as I began it: with thanks.  In addition to those I thanked earlier, I would like to send my sincere gratitude to Dr. Vitthal Kauthale,  Dr. Shivaji Sontakke, Dr. Suresh Gokhale, Mr. Balasaheb Khedekar, Mr. Yogesh Tilekar,  Mr. Digambar Gouli, Ms. Uttara Ghatge, Mr. Chetan Sadgir, Mr. Sumit Agnihotri, and Ms. Gunjan Rathi of BAIF; Ms. Maureen Valentine of Cornell University; Mr. Parag Shah and Dr. Amol Hande of Bhagyalaxmi Dairy/Gowardhan; Mr. Anand Kapoor of Shashwat; Ms. Bhavana Chilukuri of Dalberg; Mr. Jay Nargundkar of Kraft Foods; Mr. Abhi Chandrasekhara of Technoserve; and Mr. Deepak Kamath of Neotroniks for their contributions and much-appreciated expertise throughout my study.  Further, I’d like to send thanks and warm wishes to my family in Pune for their unending support, the rock upon which I built my experience. 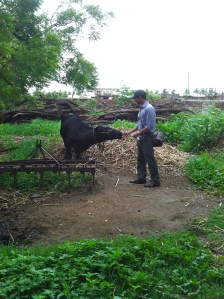 Aging in India: The Law and Elder Care