Last week, Dr. Mihir Shah, an SPS founding member who now serves on the Planning Commission of India from Delhi, arrived at The Baba Amte Center for People’s Empowerment in Neemkheda to give his biannual class to the entire SPS staff. More than fifty people descended on the campus to listen to his lecture, which this time was uniquely on the history of the organization and the story of its founding.

The Baba Amte Center for People’s Empowerment lies in the village of Neemkheda, a community that first lent its support to the vision of these young, Delhi intellectuals itching to make grassroots social change. The Center also sits near the very first watershed structures SPS created, so the hundreds of trainees that flow through the gates of the Center to learn from some of the most experienced watershed managers can see the work firsthand. Thus, the Center is embedded in its remote location for deep emotional and practical reasons. The training site also serves as the home of several staff members and interns, including Andrew and I. It is located at the end of a winding path that snakes through small huts and fields of cotton and corn after breaking with the main road. The Center is nestled at the foothills of a beautiful range of small mountains and knolls, where we have had the immense pleasure of clambering through the lush jungle in the wee hours of the morning to reach the peak. My god what a breathtaking view!

The Center lies in a region of the Dewas district area SPS works in that is referred to as ghatniche. The founding members have their main office campus and homes in a town called Jatashankar, which rests in the ghatupper region. To climb down to the Center from the main office, the closest town center of Bagli, or the mid-sized city of Indore three hours away, we must hobble down a winding mountain pass road in the middle of a dense forest that looks naked in the summer but thick in monsoon. The road skirts the edge of a drop as we make the forty-minute journey by car, bus, or motorcycle often several times a week. We twist and turn by a small orange temple embedded in the jungle with “Please leave your shoes and ego outside” painted in red on the steps. A handsome Baba with dreadlocks down to his knees sits outside the temple, often praying with guests, lighting incense, washing his clothes, or smoking some bhang. He gives us a regal wave as we pass that two-thirds marker. Sometimes we sit (or usually stand) in a stuffed bus that has come from Indore to reach ghatniche, its musical horn bursting my eardrums as I attempt to use those forty minutes for peaceful thinking. The remoteness and seclusion of this Center gave me the opportunity to disconnect from the hectic world of Penn and the US to stuff my eyes with beauty, bond with the workers and nearby villagers, spend time in quiet self-reflection, and take long walks with no distractions. I’m sure the SPS members looked upon their new homes twenty years ago with equal joyous serenity.

The founders descended upon this region of Madhya Pradesh after taking part in the Narmada Bachao Andolan in the late eighties and early nineties. NBA was a movement against a massive World Bank commissioned dam on the holy river Narmada, which was going to displace millions of people. They were agitated through this huge injustice and drew their inspiration and the Center’s namesake from a prominent leader of the movement, Baba Amte. The area the founders chose to settle their organization in a few years after they left the movement is a dense tribal, or adivasi, area. While the ghatupper region is 33% tribal, the ghatniche area where the bulk of SPS work is done is more than 80% tribal. At first, many of the adivasi communities were hesitant to accept these Indian foreigners. The tribals had repetitively encountered the worst face of the Indian State—the Forest Department. The brown sahibs would harass the villagers, confiscate their land, and treat them as sub-citizens. The government itself had launched an agricultural scheme of farm bunding in the region, but the adivasis were not told they had to pay back the money used for construction. Unable to show any cash or collateral, the police had stolen their animals at ransom and sold the living livelihoods by public auction. The tribals had only seen aggressive institutions like the Congress Party, RSS (right-wing Hindu group), Christian missionaries, and land-grabbers. Social activists were a strange new breed. SPS took some time to blend into the community and gain the trust of the inhabitants, but their caring ways and articulate purpose did win the people over.

Dr. Shah spoke in clear Hindi during his lecture, of which I will gloatingly say I understood 80%! My Hindi has dramatically improved in these past two months—my Hindi professor would be super proud. I can safely write that I have graduated from being able to say typical classroom sentences like Mujhe bahut pyas lagi (I am very thirsty) and Shah Jahan ne Taj Mahal unki begum ke lie banvaya (Shah Jahan had the Taj Mahal built for his queen) to actually have a conversation with people and understand the Nimadi speaking villagers without being completely lost! To conclude this post, I’d like to share insightful highlights from Dr. Shah’s lecture that I believe captures a few of SPS’s values and ambitions in a nutshell, and my own, personal interpretations of them.

1)    Align your efforts with those in the name you speak—If you claim to be empowering others, have the patience and humility to organize the space for them to be leaders. Learn to step back and continue asking yourself, are you actions directly helping those who you are working for?

2)    The horizon of leaders can be different than the horizons of those they claim to represent— Leaders with privilege and a grander vision for social change must ground their ambitions with addressing the daily needs of those they work with.

3)    The curriculum of development schools in India needs to be redrafted for the needs of rural India—After talking with Prasant who works here, I discovered a miniscule percent of his peers at Tata School for Social Work, the premier social work school in the country, actually work in rural India. Yet 70% of India is rural and their needs must be addressed!

4)    There is the need for the demystification of expertise—Don’t use jargon and technical formalities for an audience that deserves to understand what you are discussing. Simple is beautiful.

5)    Try not to always be the spokesperson—Let the people speak for themselves.

6)    Do what you are good at and knowledgeable about—Don’t try to do things you know you do not have the capability to. The risk is too high, especially when your actions involve the lives several other people.

7)    We, as those who work in the social sector, must continue to dialogue with those we have differences with—All shades of progressive/social change/activist/leftist/ social workers are actually on the same side of the battle. Only if we learn from each other and make comprises will we progress as human beings and will the cause progress in its grander ambitions. 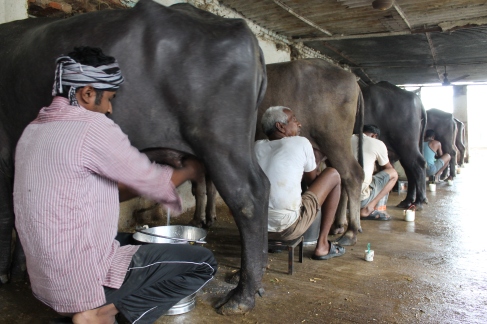 An assembly line of cow milking at Anandwan. There are over a hundred buffalos at the dairy!

Two women of the twenty-first and last SHG I interviewed for my project. I’m really said to be leaving these women!

Anandwan: The Forest of Joy