Traveling through rural India on a motorbike during the monsoon season is not pleasant.  Sharp rain drops hamper visibility, ubiquitous potholes and depressions become lakes and rivers, and tires kick up sheets of mud with each acceleration.  For farmers, though, the steady rains are a boon.  This year’s harvest is likely to be more fruitful than the previous year’s.

But the news for agrarians in India is not all good.  The Times of India reported this week that 9 million women in rural areas lost their jobs last year, a dip of more than 10% (urban women, on the other hand, gained 3 million jobs, also more than 10%).  VK Ramachandran of the Indian Statistical Institute in Bangalore points to the increased mechanization of farm labor, which often leaves women out of the loop.  Indeed, BAIF research (as well as my own observations) conducted here in Maharashtra supports that hypothesis.  While rural women regularly contribute to caring for livestock and the home, men are generally responsible for managing finances, negotiating business deals, and operating heavy machinery.  Alarmingly, only the latter skills could be considered transferable if farms become more industrialized.

BAIF has taken initiative to support rural women, introducing a groundbreaking community health center that focuses on women’s health and job training.  For decades, it has served local women who otherwise may not have any healthcare or educational  services at all.  Yet the story is not entirely positive.  Recently, staff at BAIF’s Central Research Station banned on-campus conversations between male and female staff members outside of the workplace.  Rather than prevent frivolous or immoral banter, the ban will likely quell professional development and networking.  And since there are far fewer women on the campus, the ban will disproportionately affect the more vulnerable gender.

Prior to the ban I had the chance to network with a few women who are engaged in agricultural research at BAIF.  It seems that discrimination is nothing new.  One woman had dreams of becoming a medical doctor, but her family refused to pay the tuition, leading her to agricultural science.  Two others, both with masters degrees in biological sciences, are interested in biofuel research, particularly in deriving energy from algae.  For an energy-starved country like India, such an idea has a great deal of merit.  I encouraged the pair to consider starting a company, but was swiftly shot down.  Women in India, I was told, do not take such risks.

Twenty-first century rural India faces the challenge of feeding a burgeoning population.  To accomplish this, farms may face a paradigm shift, and move toward consolidation and industrialization.  Unless discrimination in education and opportunity is stopped, rural Indian women may be left out in the cold.  And if half the population is left dependent on the other half, India will need more than just a heavy monsoon to remain food secure. 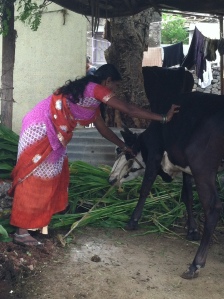 One thought on “Luck Be a Lady”

Goa- The Development of an Unexpected Brotherhood