A new chapter in this internship- Nathalie and I moved into a house really close to the hospital.

It’s definitely a whole new perspective from living in the office. We live in a neighborhood and actually are right next to a retired Indian foreign service officer- the neighborhood is called Mountain Melodies.

This was the week that really made me feel like a local. Local- that point where you know the guy who you buy the bread and milk and from, where you can walk down the street and see someone you know, or even just when you have favorite waiters in your favorite restaurants. Below is a picture of one of those restaurants, Madhuvan’s, where we befriended the owner, Gopal Ji and one of the waiters, Ganeshda.

The difference between a visitor and a local is that extra essence of knowing  people and those are the people who connect you to the area.

Being close to the hospital meant we were also able to attend some of the health camps that were further away from the office without having to make one of the doctors drive us-three to his motorbike not to mention a bookbag for each.

This was the sight of one of our last health camps and the first sight of a full on Uttarkhand rain shower. This camp, like the others took place in a local school. The woman in the picture was and had been the cook for all of the school kids in the canteen for a while. By the time the camp had fully begun, the school day had just ended and so here she is locking up the canteen/cafeteria for the school. 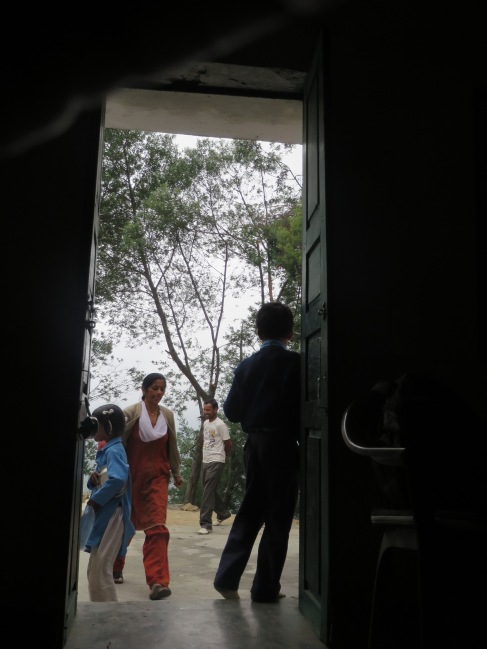 The school was a bustle with teachers and students trying to figure out what rain meant for the regular school schedule. At one point the students were running around each other in circles while the teachers ran around them trying to hustle them inside the school building. That’s the situation that I took the above picture in. In the picture you can also see Kunti di- the fantastic social health worker who I wrote about in a previous post.

And this was basically what you would find in a health camp- kids playing their own games while Dr. Sonia worked on treating the patients who appeared from around the local town. After seeing the state of some of the people who had waited until the health camp for a check-up, seeing the active and happy children running around the school was a reminder that for our projects, impact in awareness campaigning can also be found in educating the youth.

And the project searching and work continues! Can’t wait to see what other health aspects CHIRAG coordinates-

Class of 2015. Majoring in Biological Basis of Behavior. Intern at Chirag in Simayal, Uttarakhand in summer 2013.