My first two weeks in India have been wonderful! We’re in the middle of data collection for the main study of our project, which involves lots of patient phone calls with varying successes. Sometimes, our poor translator even gets scolded by angry wives, but we’re moving forward! The three of us have discovered the Indian way of answering questions here in Madurai. It is no longer nodding your head ‘yes’ or shaking your head ‘no.’ The standard answer is the head bob. It starts out looking like a shake, but then it’s more of a side to side nod, and every time I see someone do it I groan internally. (WHAT ARE YOU TRYING TO TELL ME?) It’s a very noncommittal gesture, and at first I just assumed it meant ‘no.’ It doesn’t. Sometimes the head bob is coupled with ‘okay, okay, okay.’ But then it doesn’t always mean yes either. So the ambiguity causes some problems to my already strained ability to communicate.

Last Sunday, we took our first mini vacation to Thekaddy, up in the mountains of Kerala. Diana and I have never ridden an elephant before so we had to find somewhere to do it. When else would we ever have that opportunity? Fortunately, our Dutch friend Nienke, who’s been here for five months, advised us to go to this place called Elephant Junction, where you can ride, feed, bathe, and shower with the elephants. Of course, Elephant Junction wasn’t easy to find. So first, our driver took us to the Periyar Tiger Reserve. Whenever we mentioned Thekkady, people assumed we were going on the boat safari at the Tiger Reserve, but that’s not what we wanted because we heard that there were few animals that come out at this time of year. We tried to tell him that we were in the wrong place and we were looking for Elephant Junction. Unfortunately, we got the head bob. So Diana was desperately trying to communicate to him that we’re not in the right place, and our German friend, Amir, was trying to ask for directions to Elephant Junction on the street, and Gaby and I just kind of stood there watching people staring and laughing at us.

Ten minutes later, we were getting somewhere. Somehow, Amir (who has a Tamil translation book) managed to communicate to our driver that we weren’t in the right place, and then our driver managed to get directions to Elephant Junction. We got to somewhere in the general vicinity, and Gaby saw a sign that says Elephant Junction on the right, but our driver kept going, and no matter how we protested that he’s headed in the direction of Elephant Park and not Elephant Junction, he just kept going…while giving us the head bob. So we drove for another five minutes and then we finally managed to get our driver to turn around after he spoke to a man in the road that told him we were heading in the wrong direction. We drove for fifteen minutes into the middle of nowhere, or so it seemed, before we finally arrived. But we got there!

The elephant we rode was named Indira, and I must admit, she was a bit sassy. (Indira is on the right.)

Indira would go from lethargically strolling forward to racing up the trail. Sometimes she would stop, and it took our guide a minute or two to urge her forward. There were a few times Gaby and I thought we were going to fall off, or Indira was going to wander off the trail and fall into the brush and crush us. Luckily, neither happened, and we got back from the ride in one piece. Indira clearly knew what she was doing despite our doubts.

Next came feeding the elephants, and let me just say, elephant tongues are really weird.

And then we had the elephant bath/shower with Lakshmi. According to our guide, elephant skin is two inches thick, and you have to scrub really hard, but we gave her the royal treatment and she gave us a shower. We weren’t really sure what to expect from the shower (Diana was the guinea pig), but basically we got a little wet. 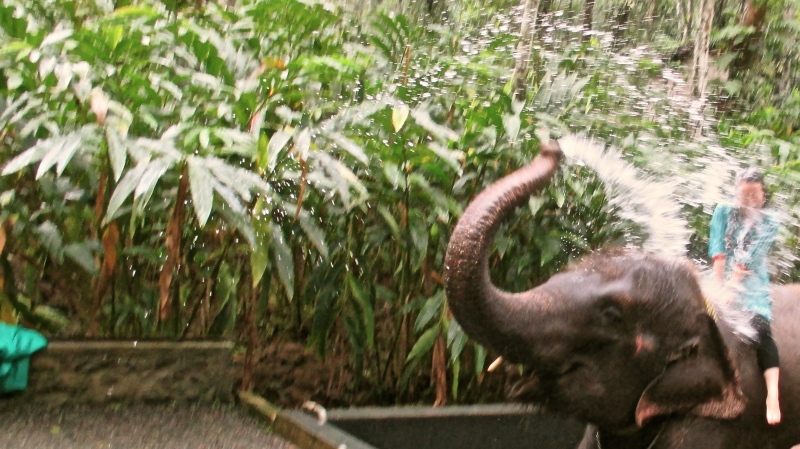 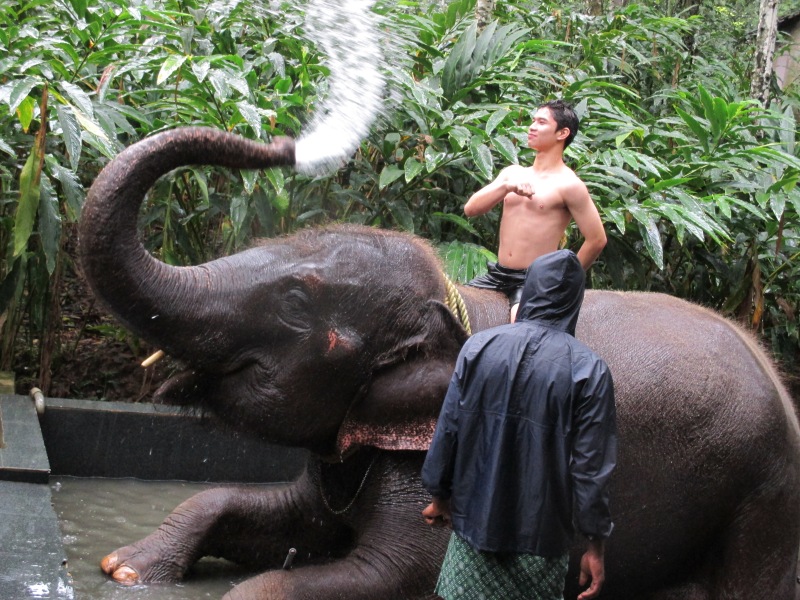 So after the initial confusion of the day, we finally got to ride our elephants, and while we could have all used Ayurveda massages after, it was a wonderful experience. Kudos to our driver who, despite our language barrier problems, safely got us to Elephant Junction and back to Madurai in rain and through that treacherous Indian traffic!

Class of 2015, double majoring in Economics and Biology. Intern at Aravind Eye Hospital in Madurai, Tamil Nadu in summer 2013. Currently a research assistant at the Center for Autism Research.