Lets start from Delhi. The searing heat combined with the sea of people that speed through the intricate patterns of the city make for an initially overwhelming experience. Imagine our small team of CASI interns trying so hard not to be “those” tourists. Well we obviously failed, as most of our meals were taken at an American diner in our hotel, complete with a jukebox, Route 66 signs and sticky red booths (see absurd picture, Figure 1). However, we did manage to leave the air-conditioned oasis of the hotel to explore some beautiful sites around town (see Figure 2).  The real adventure began when we realized that Alex, Shobana and I needed to get bus tickets north to CHIRAG. Let me tell you something, trying to obtain 3 tickets with no Hindi from Anand Vihar Bus Station in Delhi is an experience everyone should have once in their life. After about three hours of befriending the man working in the small ticket booth and accepting an invitation to hang out in the booth with him as it was assaulted by hundreds of people vying for spots on the soon departing buses, we magically got our tickets and were finally off to Uttarakhand.

Rolling into CHIRAG’s main office after the overnight trip was a breath of fresh air. The office overlooks an everlasting valley of farming villages mixed into rolling swathes of green forest patches. The next few days were devoted to exploring the area, visiting adjoining villages, meeting the people who work in the office and getting acclimatized to the flavorful food. The hilly area is crisscrossed with steep trails and roads that wind around blind turn after blind turn, making every trek out of the office an exploratory mission. However, I would never want to bore those die-hard CASI student blog fans as Alex has already described much of these first couple lazy days. It’s like someone pushed the slow-motion button on my life, reminding me of the late great Juvenile. So I will skip to my experience with my homestay.

I have spent the last couple days at a home outside the village of Rita with two other CHIRAG interns, Raghav and Gaurav. Yet, the real star of the show is M.S.R (Mahendra Singh Raikwal). The father and head of the household is a lively inquisitive energized man that always wants to “discuss” with me (as he puts it). The huge language barrier is constantly an issue, but we find ways to understand each other. Interestingly, it is more of the cultural differences that make our talks disjointed and filled with awkward pauses. I really am not sure how much a kilogram of goat goes for nowadays in the local markets. Speaking of goats check out the most rambunctious member of the family, a 2 month old baby goat that I have literally just now decided to name Ferris (Figure 3).  My house is beautiful, Nima Ji is a great cook/matriarch of the house, and the kids have limitless energy. I think I am going to be placed in the home for another week, so M.S.R and I will continue to discuss our existential existences and share secrets like school-girls. 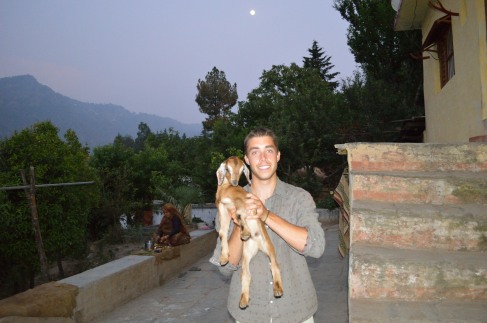 It is really hard to turn all of the adventures and experiences I have already had into logical words in these posts. I have learned so much about India and specifically, my local community. Every day I soak up huge amounts of information and am starting to feel comfortable in this foreign environment, even picking up little bits of Hindi. This summer is already shaping up to be amazing.

Now I am working towards refining my project for CHIRAG, and it looks like I have got a great possible theme that could be mind-meltingly interesting. I don’t want to spoil it, or count my goats before they are birthed. So I will reveal this revelation in my next blog post. I know, what a cliffhanger.

2 thoughts on “First Impressions of India”

Higher education or a waste of time?