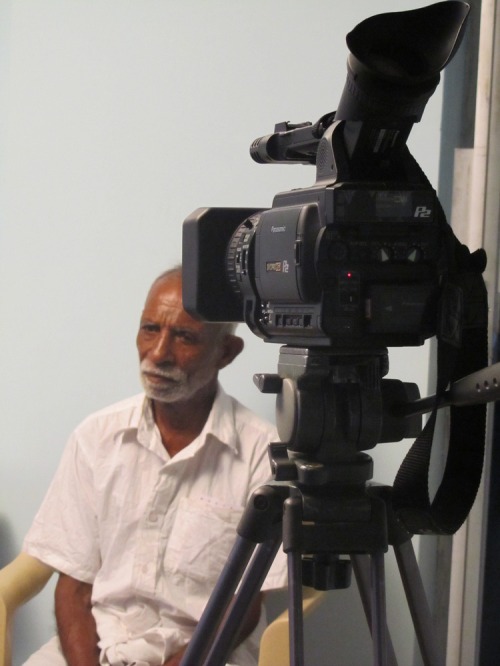 தாத்தா is the Tamil word for maternal grandfather. Growing up, my parents would introduce a lot of people to me as “uncle” or “aunty” and someone else’s grandfather was suddenly mine too. There is something about the two cultures that I grew up in, Sri Lankan and Indian, that emphasizes the connection between people, and by addressing someone as uncle or aunt or grandmother, I am showing my desire to be close to them, and expressing my commitment to treating them as I would my closest family members.

This trait has a strong presence at Aravind: the nurses are asked to call elderly men “thaatha” and the elderly women “பாட்டி” ( “paatti”meaning grandmother). So on Tuesday, when we were looking for someone to act as a patient for a video that I was involved in making, Mr. Murugesan, an employee at Aravind who works in cleaning, was brought over and introduced to me as “thaatha.” While the cameraman and the rest of us flitted about the room trying to finalize everything, thaatha just sat and looked at us patiently. I didn’t hear him speak a word until he was asked to do so as part of the filming. For some reason, that simplicity and that silence struck me as being powerful. Coming from a collegiate background, where sometimes self-worth can be measured in the number and volume of our words, I am learning to increase my appreciation for and (re)discover the importance of measured and calculated words. Sometimes, when I’m talking to a senior employee at Aravind, they get silent and think for about two to three minutes before speaking again. While I was frantically looking for ideas to make small-talk, they were hard at work, thinking and conceptualizing.

Paula-Anne is a doctor from Michigan who is at Aravind for a month, working on her fellowship. One of the projects she’s working on is studying the counselling services in the cataract clinic at Aravind, hoping to gain an understanding of how it could be replicated in a Western hospital setting. Every day for a week, I accompanied Paula-Anne to the counselling sessions, and we both did observations for about an hour so that I could help translate the conversations. Before we started, Paula-Anne told me that she wanted to write a three-four paragraph description of what happens here so that other people not present would still be able to gain an understanding of what was going on. But, she said, “it’s really important that we don’t exaggerate anything or use stereotypical and cliched words to describe the scene.”

What she said strikes true not just for write-ups for research projects, but, I think, for blog posts too. I started writing this post four times, but each time I erased my sentences to start anew because I am deeply fearful of making something more ‘exotic’ or ‘sensational’ than it actually is. India is exciting, yes, and there’s always something here to hold my fascination, which is why I keep returning whenever I can. But it’s also not a commodity, nor something that can be packaged and marketed to people via movies, tour packages, or even blog posts, even though the creators of Incredible India, inverted exclamation mark and all, would disagree with me.

What strikes me about being at Aravind, is, at the risk of creating my own word, the ‘real-ness’ of it all. The problem Aravind is trying to solve, one of blindness, is a very real problem in India, especially among people from lower socio-economic backgrounds. The problems Aravind faces while trying to achieve its mission are also very real problems: nurse don’t come to work sometimes; doctors, while getting incredible work experience, are lured by more competitive salaries; the volume of patients is too high, but only the option of increasing the volume exists: scaling back would go against everything the organization stands for. The people are real – the founding members and other employees are dressed in simple clothes, following Aravind’s very strict policy on dress code for employees: no flowers in the hair, no jingly things anywhere, no pants (for women) or jeans, and no make up. When I found out about these conditions, I took a rickshaw to Pothy’s, South India’s chain clothing store, and bought myself a shalwar kameez for each day of the week.

A lot of people at Aravind are famous. Many of the doctors here present at large conferences around the world; Thulsi Ravilla, executive director of LAICO (the consultancy-arm of Aravind) is a TED fellow; Dr. Namperumalsamy, chairman emeritus of Aravind and practicing doctor, was voted as one of Time’s top 100 influential people in the world in 2010, and many of the researchers at Aravind spend a lot of their time imparting their knowledge to organizations from around the developing world aspiring to reach Aravind’s level of success. But the weight of big egos does not weigh heavily on the atmosphere here, and that’s a refreshing change.

But moving on from abstract reflections, let me tell you about the new project that I am working on. I am working on a training manual for the MLOP (mid-level ophtmalmic personnel – informally called nurses) on the culture and values at Aravind. This project is important because Aravind’s success rests on two equally important tenets: performance, and values. The value of helping other people and doing service is one that is so embedded in the organization’s psyche, and recognizing the need to impart this to the junior staff, the senior level staff started this project. In addition to this, I am also working on a video commemorating the life of Dr. V, the founder of Aravind. His memorial day event is on July 7th, and the project was casually mentioned, and then I was told, “Sindhuri, nothing is impossible. No lunch or dinner, only hard work.”

And hard work it is, but most of my time has been spent in dialogue, or should we say, discussion/negotiation with the videographer, who always smiles at me calmly, only to follow it up with a regretful, “No, that’s difficult.” Timing, co-ordinating and editing issues aside, this video has to be done by the 7th, which means a 12 day work week with no day off, and no Pondicherry trip with Wu-Ware. But somehow, it’s all okay, because meeting people and interviewing them and talking to them is giving me the best possible orientation to Aravind.

Sobti Family Fellow 2015-2016 at the Centre for the Advanced Study of India. Currently in: Chennai, India Researching English theatre in India Website and blog: www.sindhurin.com

Chirag: May all the beings of all the worlds be happy

Histories, and a peculiar bus ride