Since we are in a pretty remote and isolated area, it is not easy taking extravagant weekend trips around India. The closet train station and airport is at least 3 hours away in Indore on really bad roadways which really limits travel options. The buses are not fun for such long periods – so we try to get a group of people together to hire a car & driver to take us to some local sites. Luckily there are plenty of things to do and see in the local area.

One Sunday a group of us went to Kaneri, a waterfall and Hindu temple deep in the jungle – Julie posted a picture a couple weeks back. Another Sunday we took a trip to Indore (the closest big city) where we went to Treasure Island, the big commercial mall. It was air conditioned which was a nice relief from the extreme heat. We watching a Bollywood film – Ready with Salman Khan and Asin, ate at Pizza Hut, had some ice cream at McDonald's, and did a little shopping. Additionally, we got to go to a local market and buy some fantastic mangoes. Two other Sundays we spent at our campus doing laundry, taking naps and a lot of reading. There isn't much to do on Sundays at our campus, especially when the electricity goes out for several hours at a time – so the day feels very long. This past weekend, we spent the night at Jhatashankar, the main office location in their guest room. We watch 3 movies: Crash, Bridget Jones' Diary and Sherlock Holmes. We ate really good food (pasta casserole, potato cutlets, mango & chocolate ice cream!) and were able to take baths with heated water. It felt like heaven. On Sunday morning we walked a couple of kilometers to a popular Hindu Temple and met a nice village women who showed us her fields. She was so friendly and inquisitive – between Julie and I, we were able to have a somewhat decent conversation in Hindi. In the afternoon, we went with Hari, the Jhatashankar cook, to the Bagli Haat. Haat is the weekly market – it happens in Bagli every Sunday. Local farmers and other people come from the surrounding areas to sell and buy vegetables, fruits, snacks, and other household items. It was quite crowded and quite a colorful site to see. It was particularly amusing to watch all the cows trying to steal potatoes out for sale. Julie and I were taking a lot of photos of the different vegetables and people when a nicely dressed gentleman came up to us and mentioned something about press pass. We got worried that we weren't allowed to take photos and put our cameras away. We had a brief stilted conversation in Hindi about our names, where we were from and how we were interning at SPS. Then he asked to take our photo. We said sure, why not. We thought he was just another person maybe visiting from another city or some government official. We never got his information and didn't think anything more about it. Until this morning. One of the core team members asked if I had seen the local Hindi paper. I said no, since I don't read Hindi, I don't pay attention to that paper. She found it and showed me the article. In the middle is the picture of Julie & I at the market – the photo taken by that gentleman. The article states we are two foreign girls shopping at the local market, attracting quite the crowd of people staring at us (nothing new – this happens everywhere we go) and how we are interning at SPS. We made the local news! I am greatly amused by this and have attached a photo of the article. Other photos attached are of Hari selecting potatoes (potatoes show up in every meal in one way or another) and of the overall market. I can't believe we only have 2 full weekends left. Our internship ends July 16th. Time is flying by. 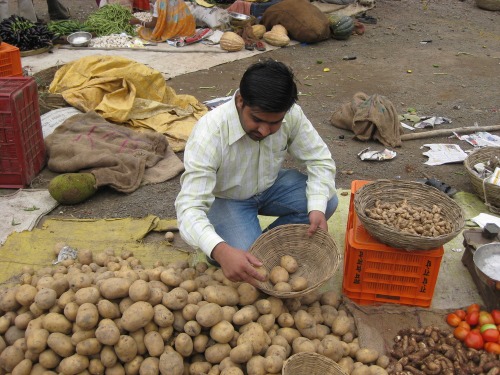 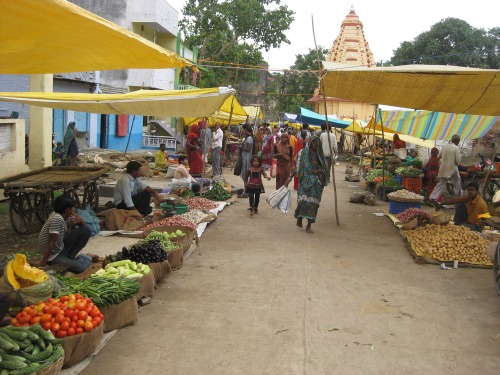 One thought on “Bagli Haat”